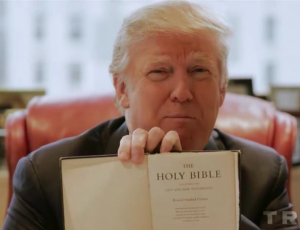 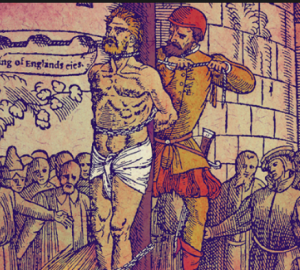 William Tyndall being burned at the stake 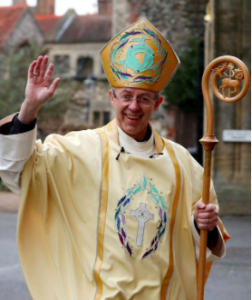 They both think Christians in the US who supported Donald Trump are a basket of Deplorable far right extremists.

Here are the Words of Rev Justin Welby, Archbishop of Canterbury, that he spoke in his Christmas Day message in London on Dec 25, 2017. "It is deeply disturbing that the President of the United States has chosen to amplify the voice of far-right extremists." The Archbishop also said, he "does not understand why fundamentalist Christians in the US support President Donald Trump".

Hillary Clinton said essentially the same thing calling President Trump’s supporters a “basket of deplorables and irredeemables”. Do the words of Clinton and the Archbishop justify or condemn them? Please read on and You decide!

Perhaps the current Archbishop should reflect on his Church, and his Government's, own history in 13th, 14th and 15th Century England. He should perhaps ponder the words of Winston Churchill, “Those that don’t learn from the past are doomed to relive it in the future”. Here’s a brief History lesson for the learned Archbishop and others:

In 13th, 14th and 15th Century England it was a law, punishable by death, that anyone caught speaking or writing the Bible in English, was to be burned at the stake. You know who supported that law? None other than the Church of England and the Archbishop of Canterbury. The following is what they did to John Wycliffe and William Tyndale, two far right English extremists of their day, who gave us a Bible in English. William Tyndale was caught and burned at the stake in 1536. John Wycliffe died of a stroke at age 56, before they could burn him at the stake.

I would suggest the Archbishop of Canterbury read the following and reflect on it before he lectures the President of the United States and the basket of deplorable Christians in the US.

Proclamations at the Ecumenical Council of Constance in 1415: Oxford professor, and Pastor John Wycliffe, was the first to translate the New Testament into English in 1318. Wycliffe's desire was to give the common English people a Bible in their own language. For that “heresy” John Wycliffe was posthumously condemned by Thomas Arundel, the then Archbishop of Canterbury, and by their Ecumenical Council’s decree, John Wycliffe’s bones were dug up, publicly burned and his ashes were thrown into the River Swift. It was a symbolic gesture in an attempt to wash Tyndall's influence out of England. It worked, Whycliffe's name and fame was spread around the world. The Archbishop’s name is forgotten, but Wycliffe’s and Tyndall’s work and names, live on.

Fate of William Tyndall in 1536: William Tyndall built upon John Wycliffe’s Bible translation work. Tyndall was a well educated man, spoke six languages and no one could tell which one was his native tongue. Tyndall translated, published was distributed thousands of New Testament English Bibles throughout England before he was captured and put to death.

In 1535 Tyndall was betrayed by a supposed friend, Henry Phillips, who really was a spy for the Church of England sent on a mission to find and betray Tyndall. Phillips was a glib talking English aristocrat, that passed himself off as a friend and supporter of Tyndall. However, his sole mission was to inform the authorities of Tyndall's whereabouts so they could capture him. Tyndall was arrested in 1535 and put into a dungeon prison in Vilvoorde Castle for over 500 days, in the most horrible conditions. Tyndall continued working on the Old Testament translation. On October 6, 1536, Tyndale was convicted of heresy and treason and burned at the stake. Tyndall’s last words, as flames consumed his body was, "Lord, open the King of England's eyes." It seems that God answered Tyndall's prayer. Just three years later, the King of England, Henry VIII, eyes were opened and he order the publication of the “Great Bible”, based on Tyndall’s work. The King even ordered a reader be provided at every church to read the Bible to those who could not read. Work continued on Old Testament based upon Tyndall’s work, and that lead to the 1611 King James Bible.

I would recommend that the Archbishop of Canterbury watch this brief 28-minute video documentary about about William Tyndall and John Wycliffe, called “The History of the King James Bible”. The Archbishop should then reflect on his Churches violent history of burning thousands of men, women and children at the stake in 13th, 14th and 15th Century England, for the capital crime of speaking and writing the Bible in English. Maybe the Archbishop should choose that as a topic for his 2018 Christmas message!

The Archbishop, and England, should apologize for their outrageous heinous crimes committed during the 13th, 14th and 15th centuries. They should build a holocaust museum and monuments, in honor of the many thousands of Bible believers they killed for the crime of speaking or writing the Bible in English. Then maybe, the Archbishop would have some right to pontificate on his left wing extremist philosophy to England’s former colonists.

It’s the height of arrogance and hypocrisy for Justin Welby, the Archbishop of Canterbury, to lecture the President of the United States and his basket of deplorables. I would remind the Archbishop and all of England, including the English Government and Prime Minister May, that if it weren’t for a previous President of the United States, the people of England would be speaking German today and there would by no Queen of England, or England as they know it today.

A final Bible Verse for the Archbishop to consider spoken by Jesus in 29AD, from the “King James Bible”. The Archbishop of Canterbury should contemplate if Jesus's words apply to him? “Woe unto you, scribes and Pharisees, hypocrites! for ye are like unto whited sepulchers, which indeed appear beautiful outward, but are within full of dead men's bones, and of all uncleanness.

The Story of the King James Bible