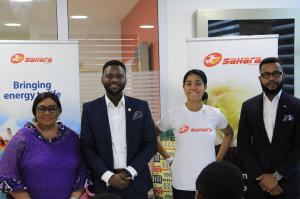 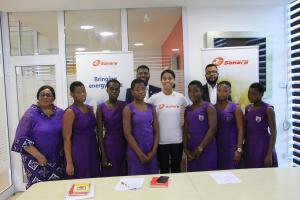 Sahara Group has appointed Zuriel Oduwole, a globally acclaimed Girl Education advocate as ambassador in bid to accelerate the achievement of the SDGs

Education is key in the development process and bringing everyone on board, especially the girl child, will lead to a holistic approach to achieving the key goals under the SDGs.”
— Tosin Etomi, Country Manager, Sahara Group, Ghana

ACCRA, ACCRA, GHANA, June 29, 2018 /EINPresswire.com/ — Energy giant, Sahara Group has appointed Zuriel Oduwole, a globally acclaimed Girl Education advocate as ambassador in its bid to accelerate the achievement of the triad of Sustainable Development Goals (SDGs) that focus on improving the access of children (especially girls) to education, fostering gender equality and creating more opportunities for girls across Africa.

The leading energy conglomerate’s partnership with Zuriel’s Dream Up Speak Up Stand Up (DUSUSU Foundation) will target SDGs 4, 5 and 10 that seek to enhance access to Quality Education, Gender Equality and Reduced Inequalities by 2030.

Globally, there are 31 million fewer girls than boys in primary school. According to the UNESCO Institute for Statistics (2016), over 9 million girls of primary-school age are out of school in sub-Saharan Africa. The partnership seeks to promote access to education and economic empowerment through film-making and other activities.

Sahara Group’s Head of Corporate Communications, Bethel Obioma, said the project will be driven by Sahara Foundation, the Group’s Corporate Responsibility vehicle. “This represents another major step for us at Sahara Group towards promoting the SDGs in Africa and across the globe. We believe the foundation for sustainable development rests on empowerment and access to equal opportunities for all children,” he said.

Speaking at the presentation of Zuriel as Sahara’s Ambassador in Accra, Ghana, Seyi Ojurongbe, Manager, Sahara Foundation said the partnership reinforces Sahara’s unwavering commitment to promoting equitable and inclusive quality education for all. According to him, “empowering the youth, especially the girl child, is a goal that Sahara Group supports passionately and we have consistently implemented several educational and capacity building projects to enhance the achievement of this goal in Africa.”
Ojurongbe said Zuriel’s age and widely accepted global campaigns uniquely position her to convey Sahara’s message in a way that is inspirational to other girls around the world. “We are particularly excited that this is a sustainable approach to empowering youth and engendering economic growth and development. We are hopeful that it would bring greater global attention to the state of the girl child in Africa and facilitate engagement on our web portal which provides users with a network of connections, facilitators, and platforms through which they can partner to grow talent, ideas, and businesses.”

Accepting her ambassadorial role, Zuriel said she was delighted to be given such an important role that will impact millions of girls in Africa and around the world. “Entering into this partnership with Sahara Foundation gives me a much bigger platform to contribute to global efforts aimed at empowering the girl child. With Sahara’s support, I hope to enhance my film-making classes for girls which have proven to be a strong empowerment medium.”

Tosin Etomi, Country Manager, Sahara Group (Ghana) Energy, expressed his gratitude to Zuriel for accepting to be part of Sahara’s initiative on gender and inclusive education. “Education is key in the development process and bringing everyone on board, especially the girl child, will lead to a holistic approach to achieving the key goals under the SDGs.” Etomi added, “Initiatives like the one was undertaken by Sahara and Zuriel at the Tema Manhean Secondary Technical School during which Zuriel took a number of female students through the art of film-making will have a positive impact on a whole community.”

Mrs. Gertrude Quashigah, the Deputy National Coordinator of the Ghana Schools Feeding Programme (GSFP) who graced the occasion, said she was “encouraged by Zuriel’s role in empowering the girl child and for promoting gender equality”. She commended Sahara Foundation for the initiative and reiterated government’s support and commitment to using education as a development tool for lifting millions out of poverty.

Bubune Mensah, a representative of the Manhean Technical Secondary School Tema, who spoke on behalf of her colleagues, commended Sahara Foundation and Zuriel for introducing the students to filmmaking. “Now we are all able to produce our own films and document occurrences in our lives”.

Sahara Foundation has implemented over a hundred and fifty programmes and initiatives across Africa reaching over two million beneficiaries in areas such as education, youth empowerment, capacity building, health and environmental protection among others. Sahara Foundation sits on the advisory board of the UN’s Sustainable Development Goals Fund and for years, the energy giant has been championing the need for collaborative efforts towards achieving the SDGs.

Sahara Group Moves to Boost Achievement of SDGs 4, 5 and 10 in Africa