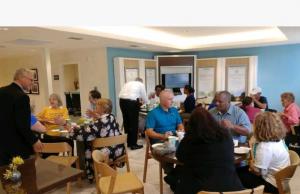 These guests have learned a skill that enables them to openly communicate with anyone and move forward to accomplish their group’s mission.”
— Clemence Chevrot, Director for the Clearwater Community Volunteers Center

CLEARWATER, FLORIDA, USA, October 31, 2018 /EINPresswire.com/ — On the 30th of October the Clearwater Community Volunteers Center held its monthly Charity Networking Luncheon for Tampa Bay nonprofits to network and form new partnerships. The luncheon was the most diverse to date with 13 different nonprofits in attendance whose activities vary from disaster preparedness, environmental restoration, to educating children.

Ms. Chevrot was the luncheon’s keynote speaker. Ms. Chevrot has worked in the non-profit field for the past five years, both across Europe and here in the United States. This work has included human rights advocacy and disaster relief. After the complimentary lunch, Ms. Chevrot delivered a short workshop on how to get into communication with anyone. Wanting to get the attendees into immediate action, her workshop concluded with an exercise where guests used this knowledge to get an otherwise non-talkative person to communicate with them.

Ms. Chevrot said, “It can sometimes be frustrating trying to communicate with another person who doesn’t want to talk. However, communication is vital to the smooth running of any non-profit organization – it’s how you form new partnerships, get new volunteers for your cause or getting donations. Like philosopher L. Ron Hubbard once wrote, ‘A man is as dead as he can’t communicate. He is alive as he can communicate.’ These guests have learned a skill that enables them to openly communicate with anyone and move forward to accomplish their group’s mission.”

The next luncheon will be on November 27th and is open to non-profit groups or volunteers. For information about the Clearwater Community Volunteers Center please call Michael Soltero at (727) 316-5309 or email ccvcenter@ccvfl.org.

About the Clearwater Community Volunteers:

The Clearwater Community Volunteers have over 25 years of community service under their belt with over 150,000 families and children helped since their founding in 1992. Sponsored by the Church of Scientology Flag Service Organization, they stay true to their reputation of helping others with their new center located on the corner of Fort Harrison Avenue and Drew Street in downtown Clearwater.