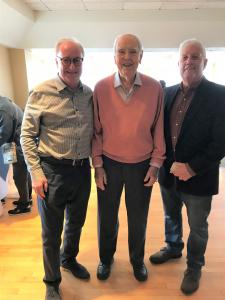 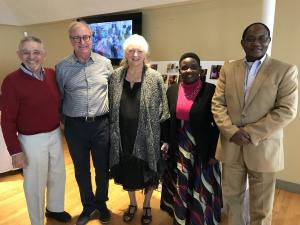 While great strides have been made in the battle against HIV, Kenya still has the fourth largest epidemic in the world. As of 2015, 660,000 children were recorded as being orphaned by AIDS.””
— Daniel P. Gibson

ANDOVER, MA, USA, November 30, 2018 /EINPresswire.com/ — For Andover resident Daniel P. Gibson, a recent fundraiser to help support An Orphan's Dream was a big, important step along a continuing road – a road to provide care for the young AIDS orphans at the Oasis of Peace Village in Kenya.

Gibson, Chief Executive Officer of National Loss Investigations (http:/nliclaim.com) in Burlington, is a champion of the Oasis of Peace Village in Embu, Kenya. As a founding member and Vice President of the nonprofit An Orphan’s Dream, the organization which raises funds to support the mission of Oasis of Peace, Gibson has had the occasion to see firsthand the work that the organization does.

He recently returned from a trip to Kenya, where he met with the organization’s founders and visited with the orphans. Seeing firsthand the challenges that these young orphans face has given Gibson a renewed passion to support the orphanage. He was one of the organizers of a recent fundraiser held at the Red Parrot Restaurant in Hull, which was attended by more than 100 people on November 18.

Gibson was joined by Oasis of Peace founder Virginia Burbank, who traveled from Kenya to help with the Hull fundraiser.

She was joined by Symon Maringa of Dracut, president of the U.S. fundraising organization, “An Orphan’s Dream.” In fact, the land on which the orphanage is built has been in the Maringa family for more than 40 years.

Gibson said, “We welcome children at the Oasis of Peace orphanage following the loss of a parent or caretaker. The reasons behind the loss are AIDS, extreme poverty, and violence. Unfortunately, the trauma of such a loss is only further magnified by the circumstances surrounding it, which too often are witnessed first-hand by the child.”

He said, “While great strides have been made in the battle against HIV, Kenya still has the fourth largest epidemic in the world. As of 2015, 660,000 children were recorded as being orphaned by AIDS.”

Gibson said that the team he works with includes “the best people in the world.” He said, “This is a selfless group of volunteers all committed to making a difference, and it’s such a privilege to be part of this effort.”

The fundraiser on November 18 raised more than $12,000, making it one of the most successful of the eight fundraisers that have been held.

An Orphan’s Dream is a non-profit organization. For more information, please visit the website at anorphansdream.org. or call Kris Richards at 339.788.0384.

Dan Gibson (left) of Andover, Vice President of An Orphan’s Dream, a group which raises funds to support the Oasis of Peace Orphanage in Kenya which provides a home for orphans of AIDS families, is seen here at a recent fundraiser held at the Red Parrot Restaurant in Hull. Shown with Dan is Dick Dennis of Hingham, who is the stepson of former Boston Mayor James Michael Curley, and Bob Casey.

Dan Gibson, second from left, Vice-President of An Orphan’s Dream, a nonproft organization which supports the Oasis of Peace Orphanage in Kenya for orphans of AIDS families, is shown at recent fundraiser in Hull to support the orphanage. Shown with Dan, from left to right, are Bob Ernst; Virginia Burbank, Founder, An Orphan’s Dream; Carol Murugi, Director of An Orphan’s Dream; and Symon Maringa, President.