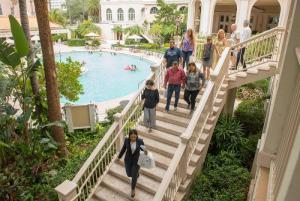 In addition to our community and non-profit events, we invite locals once a month to see the iconic building, which is part of their heritage.”
— Amber Skjelset, Manager of the Scientology Information Center

CLEARWATER, FLORIDA, US, February 28, 2019 /EINPresswire.com/ — On Saturday, February 23rd a group of local residents stepped inside the Fort Harrison for a tour that featured the building and its history. The Fort Harrison, purchased in 1975 and located in downtown Clearwater, is the Church of Scientology’s International religious retreat. In 2009, a top-to-bottom restoration was done bringing it back to its original splendor and beyond.

21 guests attended the tour; one special guest was the building’s last manager before it was purchased by the Church. He also shared a bit of history from his tenure on the job and was thankful for the opportunity to view the Fort Harrison today.

“The Fort Harrison has a special place in the hearts of many people,” said Ms. Amber Skjelset – Manager of the Scientology Information Center. “In addition to our community and non-profit events, we invite locals once a month to see the iconic building, which is part of their heritage.”

The 92-year-old grand dame, built in 1927 was the site of cotillions, dinners for the social elite and a place where the “who’s-who” of Clearwater gathered.

At its inception, the Fort Harrison had its own silver set made by the International Silver Company. During the 1920s and 1930s the Silver Company made items such as creamers and mini tea and coffee pots for hotels, restaurants and resorts across the United States. During this period, the Fort Harrison also had its own dinnerware with its iconic profile emblazoned in the center. Currently, the china used in the Fort Harrison’s dining facilities is made by Pikard, the same company that makes china for the US State Department, the Queen of England, and the King of Saudi Arabia.

Some of the spaces guests visited were a 9th floor guest room and parlor, the Auditorium used for community events, and the Fort Harrison Garden. The Hibiscus Restaurant, the Fort Harrison’s fine dining facility was also featured. In 2016, the Hibiscus was recognized for food excellence by the Chaîne des Rôtisseurs, the world’s oldest international food and wine society.

Guests also got answers to questions about Scientology’s beliefs, symbols and the difference between the staff of the Church’s religious order who are uniformed and parishioners attending Scientology services.

One guest said after the tour, “I had no idea that the Church of Scientology sponsors charity events for non-profits. The fact that those organizations can retain 100% of the proceeds for their cause is awesome.
I honestly don’t know of any other organization that does that.”

To learn more about the next Fort Harrison Tour or the Church of Scientology please contact Ms. Amber Skjelset at (727) 467-6966 or email amber@cos.flag.org. The Scientology Information Center is located at 500 Cleveland Street and is open daily from 10 am to 10 pm.

The Fort Harrison serves as the international religious retreat for the Church of Scientology. With more than 11,000 Scientology Churches, Missions and groups spanning six continents, Scientologists come to Clearwater from all over the world for religious training and ministerial services. The Fort Harrison is made available to community groups and charities for their special events and fundraisers. Scientology is an applied religious philosophy based on the work of L. Ron Hubbard.