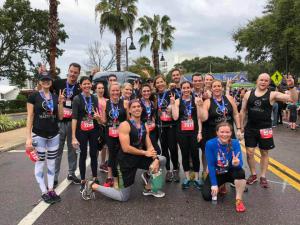 Today, the increase in automated machinery and equipment has led to a less physically active society. We have to keep our bodies on the go, to stay healthy and keep our minds sharp.”
— Tanja Cranton, ED of TWTH Association of Tampa Bay

TAMPA , FLORIDA, US, February 28, 2019 /EINPresswire.com/ — Nineteen members of The Way to Happiness (TWTH) Association Tampa Bay Running Team ran in the 23rd February Gasparilla Distance Classic race. Among the 14,000 who ran the race, two members of TWTH Running Team placed 20th and 29th in the 5K and two others placed 30th and 33rd in the 15K. But no matter where the other team members placed in the race, they were all winners because as they promoted TWTH’s 21 principles for better living. The Way to Happiness, a non-religious moral code written by L. Ron Hubbard, includes principles such as, “Take care of Yourself,” “Set a Good Example”, and “Be Competent” all of which the team demonstrates through this sport and which they prominently display on their t-shirts.

Tanja Cranton Executive Director of The Way to Happiness Association Tampa Bay said, “Today, the increase in automated machinery and equipment has led to a less physically active society. We have to keep our bodies on the go, to stay healthy and keep our minds sharp. TWTH running team has been doing just that through this race, the seven races we have participated in this season and all of the races we have been in since the establishment of this team.”

The Way to Happiness is authored by L. Ron Hubbard and TWTH Association Tampa Bay is one of nine humanitarian outreach programs sponsored by the Church of Scientology.

The Way to Happiness Association of Tampa Bay:

The Way to Happiness book was written and published by L. Ron Hubbard in 1981 as a nonreligious, common-sense guide to better living. Its purpose is to help arrest the current moral decline in society and restore integrity and trust to humankind. It is available in 112 languages, with some 115 million copies distributed in 186 nations. The campaign to distribute the book has been embraced by more than 257,000 groups and individuals and millions around the world have received the materials free of charge thanks to the continued sponsorship of the Church of Scientology. The Way to Happiness holds the Guinness World Record as the single most-translated nonreligious book and fills the moral vacuum in an increasingly materialistic society.