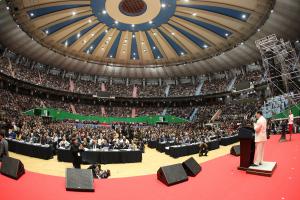 30,000 people in agreement with Chairman Lee’s declaration of peace. 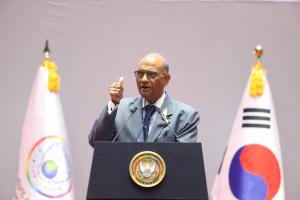 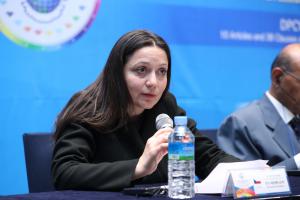 Ms. Anna Cervenakova explaining the need for a culture of peace.

WASHINGTON DC, UNITED STATES, March 15, 2019 /EINPresswire.com/ — On March 14th, about 30,000 people from all sectors of the society including government officials, religious leaders, heads of NGOs, press and media, and citizens gathered in Seoul, South Korea, to redouble efforts for the establishment of international law for peace.

Achieving the 3rd anniversary this year, the annual commemoration of the Declaration of Peace and Cessation of War (DPCW) was hosted by an international peace NGO, Heavenly Culture, World Peace, Restoration of Light (HWPL), to share the progress of activities undertaken to introduce the DPCW to the UN as a resolution.

The DPCW drafted by international law experts includes principles of peacebuilding such as the prohibition of the use of force, development of friendly relations, and peaceful dispute settlement. The DPCW emphasizes international cooperation based on interfaith dialogue and civic participation to create and spread a culture of peace.

Mr. Pravin Harjivandas Parekh, President of Confederation of Indian Bar, said “HWPL’s strength comes from uniting all sectors of civil society with this work of peace. The DPCW connects considerably with civil society contributors since peace cannot be continued merely through the voices of the elite. It suggests civil societies function as peace-building activists which encourage citizens’ advocacy that brings forth a culture of peace.”

According to the progress report announced at the event, the DPCW has been adopted as national legislation by Seychelles, eSwatini, and Comoros. Regional organizations such as PARLACEN (Central American Parliament), PAP (Pan-African Parliament), and International Centre for Black Sea-Baltic Studies and Consensus Practices (Centre for BBS) have cooperated with HWPL in support for the enactment of the DPCW by signing MOUs.

This year’s commemoration highlighted the “Peace Letters” to the heads of states and UN ambassadors in 193 countries. Written by global citizens, the “Peace Letter Campaign” as an effort towards establishing a legally-binding framework for an international law of peace.

“Since 2018, IPYG has collected over 200,000 peace letters and sent them to the heads of state of the following: South Africa, Indonesia, New Zealand, Namibia, Malaysia, Bosnia and Herzegovina, and South Korea.

“Starting from today, we have great expectations for its future. The first goal is to submit the DPCW to the UN General Assembly in the form of a draft resolution and have it adopted. The second is to create a new peninsula to achieve peaceful unification. Let us become all heroes of peace together,” said Mr. Young Min Chung of general director of IPYG.

Chairman Man Hee Lee of HWPL said, “Korea has undergone much sorrow from the division, which still threatens our daily lives. When I was 20 years old, I had no choice but to join the tragic war. We need to listen to what the soldiers said. They blamed their countries. Do the countries compensate for the loss of life? There should be no longer victims of war in our globe. Should we stand still and do nothing in this reality?”

“The unification of Germany was triggered by citizens, not by force or politics. Some might say that the military confrontation serves as a major challenge to peace and unification. Use of force must be dissuaded to achieve peace, which is also designated in the DPCW. It has principles to secure peace in our times. When we advocate peace to our national leaders, they can be peace advocates; however, if they do not listen to their people, they will be offenders against peace,” he added.

The host organization, HWPL, is a peace NGO in Special Consultative Status with the UN ECOSOC and associated with the Seoul Metropolitan Government and the UN DGC. For the purpose of ceasing all wars and creating a peaceful world as a legacy for future generations, HWPL has been carrying out 3 main peace initiatives – international law for peace, inter-faith dialogue meeting, and peace education.