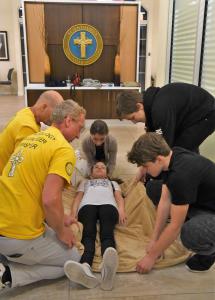 Scientology Volunteer Ministers are preparing for Florida’s hurricane season at the VM Center downtown Clearwater in first aid and other techniques.

We make sure our volunteers are well-trained and equipped to help under chaotic circumstances in a safe and efficient manner.”
— Glendy Goodsell, ED Scientology Volunteer Ministers Florida

CLEARWATER, FLORIDA, US, May 22, 2019 /EINPresswire.com/ — With the Atlantic hurricane season starting in less than two weeks, and tornadoes striking the southern United States, the Scientology Volunteer Ministers (VMs) are getting prepared at their disaster response training sessions. Anyone interested in volunteering for disaster relief is invited to attend the training sessions which are held every two Tuesdays starting at 7:30 pm at the Florida VM headquarters in downtown Clearwater. June 4th is the next training session. Over the past six weeks, VMs have been trained by a licensed Emergency Management Technician on first aid and safety. VMs have also learned how to apply Scientology Assists, as an adjunct not a substitute to medical aid, to address and relieve trauma for first responders, rescue workers, and disaster victims.

Since 2001, VMs have helped victims in major disasters, including at 9/11, earthquakes, fires, hurricanes, tornadoes, floods, and volcanic eruptions worldwide. VMs are also trained to help their friends and neighbors with such issues as the loss of a loved one, accidents, problems with children, problems with drugs and organizing life or business.

“In Florida we have a large group of Volunteer Ministers ready to help when needed,” said Glendy Goodsell, Executive Director of the Florida chapter of the Scientology Volunteer Ministers. “We make sure our volunteers are well-trained and equipped to help under chaotic circumstances in a safe and efficient manner.”

VM classes are free and available to the public at the VM Center, 101 N. Fort Harrison Avenue, Clearwater, Florida and online at www.volunteerministers.org. For more information call 727-467-6965 or email glendy@volunteerministers.org. Tours of the AV displays, Assist room, courseroom and more at also available every day from 10am to 10pm at the Scientology VM Center in Clearwater.

The Scientology Volunteer Minister (VM) program was launched more than thirty years ago, in response to an appeal by Scientology founder L. Ron Hubbard. Noting a tremendous downturn in the level of ethics and morality in society, and a consequent increase in drugs and crime, Mr. Hubbard wrote, “If one does not like the crime, cruelty, injustice and violence of this society, he can do something about it. He can become a VOLUNTEER MINISTER and help civilize it, bring it conscience and kindness and love and freedom from travail by instilling into it trust, decency, honesty and tolerance.” The program has adopted the slogan: “Something Can Be Done About It”. At the Scientology Volunteer Ministers center in downtown Clearwater, VMs are trained in the 19 chapters of the Scientology Handbook, basic first aid and safety techniques.