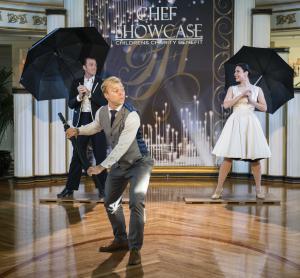 Musical entertainment was also on the menu at the 7th Annual Chefs Showcase on June 2nd at the Fort Harrison, the Church of Scientology’s International Religious Retreat.

When children become unimportant to a society, that society has forfeited its future.”
— L. Ron Hubbard

CLEARWATER, FL, US, June 14, 2019 /EINPresswire.com/ — Nearly one hundred and twenty foodies gathered to raise funds for local charities while enjoying an epic night at the Church of Scientology’s Fort Harrison religious retreat on June 2nd. The occasion was the 7th Annual Chefs’ Showcase. Featuring a Cinematic theme, the event benefitted the Clearwater Community Volunteers and the Children’s Home Network of Tampa Bay. The event was an evening of entertainment, food and wine overlooking the Clearwater Bay and the Gulf of Mexico. More than $30,000 was raised to help young people and families in need.

Co-sponsored by Tampa Bay Magazine, the event celebrated the art of cinema and focused on creating a happy Hollywood ending for children whose life starts out on a rough note.

“Tonight, we sit right in the middle of one of Pinellas County’s 5 at-risk zones for youth,” said Lisa Mansell, Chairwoman of the event and the Public Affairs Director for the Church of Scientology Flag Service Organization. “This would not indicate a happy Hollywood ending for anyone, except there are organizations in our area who – like Cinderella’s Fairy Godmother – can effectively do something to change the ending of this script – the Children’s Home Network of Tampa Bay and the Clearwater Community Volunteers.”

The Clearwater Community Volunteers has been providing food, toys and entertainment to Pinellas County families in need since 1992. The Children’s Home Network, established 127 years ago, provides a broad array of services to children. As the event was underwritten by generous sponsors, all of the ticket sales went directly to the charities.

Each chef was introduced to the assembled guests and then described their course. This was followed by the Fort Harrison’s in-house sommelier describing the wine pairing. The guests were treated to different courses – from an Amuse Bouche inspired by “Alice in Wonderland” to an dessert inspired by “Crouching Tiger, Hidden Dragon”.

But the focus of the event was raising funds for at-risk youth and their families.

Ms. Mansell said, “Author, humanitarian and Scientology Founder L. Ron Hubbard wrote that ‘When children become unimportant to a society, that society has forfeited its future’. The Clearwater Community Volunteers and Children’s Home Network of Tampa Bay have assisted thousands in need and we are very proud to help these organizations.”

The Fort Harrison has served as the International Religious Retreat for the Church of Scientology since 1975. Fully restored in 2009, the Fort Harrison regularly hosts charity events.

Tampa Bay Magazine has been the go-to magazine for Tampa Bay area residents since 1986. Showcasing all that is good in the area, publishers Aaron Fodiman and Margaret Word Burnside also provide a forum for non-profits to reach the Bay-area residents most likely to support their endeavors.