The NCJFCJ is the Nation’s Oldest Judicial Membership Organization 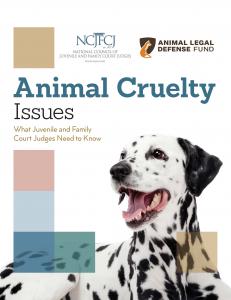 By recognizing the link between animal abuse, judges place themselves in the unique position to adjudicate cases in a manner that promotes the safety and wellbeing of people and their pets.”
— Judge Rosa Figarola, Eleventh Circuit Court, Florida

RENO, NV, UNITED STATES, August 14, 2019 /EINPresswire.com/ — The National Council of Juvenile and Family Court Judges (NCJFCJ) released its latest resolution regarding animal cruelty and its link to other forms of violence.

Empirical research demonstrates a direct link between animal cruelty and interpersonal violence including intimate partner abuse, child abuse, juvenile justice, and elder abuse. Ninety-nine percent of pet owners consider their animals to be companions or family members. In homes where serious animal abuse has occurred, there is an increased probability that some other type of family violence is also happening. As of last year, 32 states, including D.C. and Puerto Rico, have enacted laws that include pets in domestic violence protection orders.

The NCJFCJ is committed to upholding the rights of all parties and victims, the safety of all family members, and the safety of the community. The resolution states that animal cruelty is a crime of violence and may be indicative of past or future violent acts. Researchers have found that 43 percent of U.S. school shooters between 1988 and 2012 had histories of animal abuse.

The NCJFCJ recognizes that in the context of juvenile and family court cases including cases of domestic violence, the court should consider the welfare of such abused animals in reaching its decisions. There is a demonstrated link to the safety of human beings at the hands of the animal abuser, when animals are subjected to cruelty. Abuse of a companion animal is one of the four most significant risk factors for someone becoming a domestic abuser and is an indicator of the use of controlling and violent behaviors.

Eighty-nine percent of women who had companion animals during an abusive relationship reported their animals were threatened, harmed or killed by their abuser. Children who exhibit cruelty towards animals are more than twice as likely to have suffered maltreatment themselves.

“Recognizing the link between animal abuse and other forms of violence allows a judge to address all the ways that violence affects a family and a person’s interrelationship with the world around them thereby allowing for more effective treatment and a safer environment for the people and animals that comprise the family,” said Figarola.

The resolution recommends to minimize an abuser’s access to animals; increase access to offense specific psychological assessments, evaluation and treatment for individuals charged with animal cruelty offenses; and collaboration and communication with various welfare agencies including those devoted to animal welfare, the prevention of domestic abuse, child welfare, and the care of the elderly and individuals with disabilities to better detect and address concurrent forms of abuse.

“As judicial officers, it is our responsibility to consider the importance of animals as family members in juvenile and family law decisions,” said Judge John J. Romero, Jr., NCJFCJ president. “The NCJFCJ is calling for judges to consider the time and resources necessary to address animal cruelty allegations associated with cases that come before their bench to achieve just results and prevent future violence against both humans and animals.”

The NCJFCJ will collaborate with allied organizations and experts to develop and make available educational resources and trainings to assist judges in better understanding the issues and implications of juvenile and family court cases involving animal cruelty.

Earlier this year, the NCJFCJ and the Animal Legal Defense Fund (ALDF) held the first-ever judicial convening on animal cruelty with Judge Figarola, Judge Romero, and Chief Judge Philip Taylor, Ph.D. in attendance, and served as the first formalized partnership between an animal protection organization and a national judicial group. ALDF attorneys and NCJFCJ member judges throughout the country took a deep dive into issues surrounding animal abuse and neglect, especially those affecting domestic violence and juvenile delinquency and dependency cases.

The convening resulted in the mentioned resolution and the development and creation of the new technical assistance bulletin, Animal Abuse Issues: What Juvenile and Family Court Judges Need to Know. This new bulletin provides guidance for judicial officers regarding the link between animal cruelty and family and interpersonal violence; animal cruelty in relation to family violence, child abuse and neglect, juvenile offender, and elder abuse cases; and screening and assessment recommendations. Access this publication: https://www.ncjfcj.org/Animal-Cruelty-TAB

“It is critical that judges become more aware of the interconnectedness of animal neglect and cruelty issues in family, juvenile, and domestic cases,” said Judge Philip Taylor, City of Acworth Municipal Court in Georgia. “This technical assistance bulletin on animal cruelty is an invaluable resource to assist judges in identifying, assessing, and property addressing animal neglect and cruelty matters. It is a tool that can assist any judge, in any court, in being more fully informed about animal cruelty issues.”

“The Animal Legal Defense Fund is proud to partner with the NCJFCJ to produce this first-of-its-kind technical assistance bulletin exploring the link between animal cruelty and interpersonal violence,” said Stephen Wells, executive director of ALDF. “By providing judges with all the information and tools they need to recognize this link and to craft effective, sustainable solutions, we can build safer communities for both humans and animals alike.”