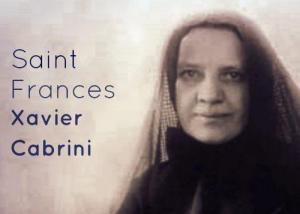 Chirlane McCray, wife of Mayor DeBlasio, heads group that will not build a statue of St. Frances Xavier Cabrini, despite saint receiving the most nominations

BLOOMFIELD, NJ, USA, September 16, 2019 /EINPresswire.com/ — The Italian American ONE VOICE Coalition (“IAOVC”), a nationwide coalition of anti-bias activists, admonishes Chirlane McCray, wife of Mayor Bill DeBlasio, and her “She Built NYC” group, for ignoring the will of the people while insulting immigrants, Catholics and Italian Americans for the decision to not erect a statue honoring the first American Catholic saint and patroness of immigrants, St. Frances Xavier Cabrini, an Italian immigrant who founded 67 schools and orphanages dedicated to the sick, poor and immigrants in New York City.

The McCray group “She Built NYC” was established in June of 2018 to create more statues honoring women around the city of New York. The public was asked to nominate women for a potential statue from over 300 eligible women. Mother Cabrini received the highest number of votes, more than double the votes received by the second-place finisher. However, last month it was disclosed that the selection committee, headed by McCray, excluded Mother Cabrini from having a statue, choosing instead seven others.

“In this one move, the First Lady of New York has subverted the will of the people and insulted immigrants, Catholics and Italian Americans,” stated Dr. Manny Alfano, Founder and President of IAOVC. “How can she and her group possibly defend such a disgraceful and disrespectful decision that affects so many people. What a complete debacle of a process that was supposed to be something good for New York City.”

A multitude of New Yorkers and organizations have objected to the decision to exclude Mother Cabrini from the statue honor and have contacted New York First Lady McCray to seek a reversal of this decision. IAOVC sent a letter to McCray which has gone unanswered. The letter is posted on the IAOVC website at: http://www.iaovc.org/2019/09/06/letter-to-new-york-first-lady-chirlane-mccray/

IAOVC is urging all who object to this action by First Lady McCray and her She Built NYC group to contact her at shebuilt@women.nyc or at MyNYC@nyc.gov – and Twitter @nycfirstlady

IAOVC’s sole focus and objective is to fight bias, stereotyping and discrimination against Italian Americans. It is the only national Italian American organization with this exclusive mandate. IAOVC’s stated mission is to “…secure the rightful representation of Americans of Italian origin and of all peoples whose paths toward social equality have been impeded. The powers of intellect, wisdom and due process of law will be brought to bear on all inequities.”

IAOVC issues a regular email newsletter, “The Alfano Digest,” to over 5,000 individuals and Italian American organizations nationwide. Written and compiled by IAOVC founder and President, Dr. Manny Alfano, the Digest issues alerts on instances of bias, stereotyping, discrimination and defamation as well as activates the IAOVC nationwide network of “Defenders” who respond through calls, emails, social media, letters and demonstrations where necessary. The Alfano Digest also contains interesting and informative Italian American cultural and heritage news and information. To receive the Digest, email Dr. Alfano at mannyalfano@comcast.net.

To join or obtain more information on The Italian American ONE VOICE Coalition visit iaovc.org.