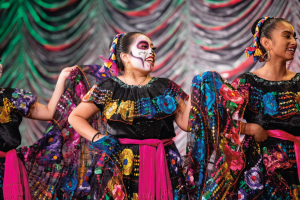 CLEARWATER, FL, UNITED STATES, November 28, 2019 /EINPresswire.com/ — On Sunday the 24th of November, the Grupo Folklorico Mahetzi held their 9th anniversary celebration at the Historic Fort Harrison, the iconic retreat of the Church of Scientology Flag Service Organization. The Mexican folkloric dance group performed several sets of traditional dances endemic to different Mexican states from Tabasco to Chiapas and half a dozen more.

The theme for the recital was Día de los Muertos, (or Day of the Dead), which is a celebration of life and death which originated in Mexico. Forty dancers wearing traditional dresses, and half skull makeup performed for nearly three hours to the delight of the some 500 friends and family members in attendance.

“We are doing this for the kids” said Mere Pioquinto, founder of Grupo Folklorico Mahetzi. “Youth need to know their culture and where they are from, it is part of their identity, this is the reason why I founded the group.”

The organization is run by volunteers, who take care of everything from the choreography to booking the group at events throughout the Tampa Bay area. The funds raised from the Anniversary celebration help to fund the group’s costumes, which are handmade. The young dancers, who worked hard all year to learn dance moves were awarded for their hard work and beautiful performances.

“It is a pleasure for the Fort Harrison to host such a artistic and cultural group” said Clemence Chevrot, the Community Affairs Director for the Church of Scientology Flag Land Base. “It goes along with what Scientology’s founder L. Ron Hubbard wrote: ‘A culture is as rich and as capable of surviving as it has imaginative artists.”

About the Church of Scientology:

The Scientology religion was founded by humanitarian and philosopher, L. Ron Hubbard. The first Church of Scientology was formed in the United States in 1954 and has expanded to more than 11,000 churches, missions and affiliated groups, with millions of members in 165 nations. Scientologists are optimistic about life and believe there is hope for a saner world and better civilization, and actively do all they can to help achieve this. The Church of Scientology regularly engages in many humanitarian programs, such as anti-drug campaigns, human rights campaigns and global education programs. To learn more, visit www.scientology.org.

The doors of The Fort Harrison, the Church of Scientology Flag Service Organization’s signature retreat, are open for non-profit organizations and charities to hold their own events.