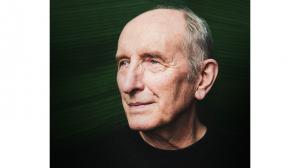 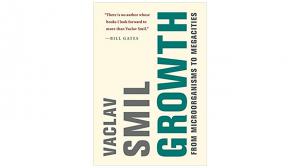 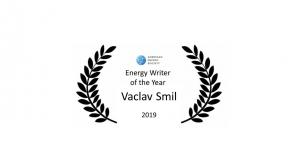 The premier literary award for energy.

In praise of Vaclav Smil: "There is no author whose books I look forward to more than Vaclav Smil." – Bill Gates

Many people … could halve their energy and material consumption … without losing anything important. People don’t realize how much excess they have in their lives.”
— Vaclav Smil

PALO ALTO, CA, UNITED STATES, December 10, 2019 /EINPresswire.com/ — The American Energy Society has selected Vaclav Smil as the Energy Writer of the Year, 2019, for his book, Growth: From Microorganisms to Megacities (The MIT Press, 2019).

Vaclav Smil contends that growth is one of two constants at the center of everything: the lives of microorganisms and the development of human beings; the harnessing of wind and water and the invention of machines; the fortunes of economies and the development of cities…." Growth is an omnipresent reality of all life and every society.

The other universal constant: growth has natural limits.

In Growth, Vaclav Smil traces the arc of it all, from origins to end. Consequently, Growth is unavoidably dense. Readers who are intimidated by its weight (both literal and figurative) should comfortably skim certain sections – like the logarithmic analysis of Malthusian population trends – but should also take time to pause and reflect on the many powerful ideas behind the data. Readers who invest the intellectual effort will be rewarded with a profound grasp of Smil’s larger thesis: perhaps humanity has exhausted its limits.

No doubt Growth will have its critics who hold desperately to certain sacred assumptions. For instance, best-selling author Thomas Friedman argued that because the world is flat, everything is interconnected: "what works in one place has value for everyone." But in Growth, Smil rejects such formulae, as when he compares countries: “Denmark has little in common with the Philippines, and neither have much in common with Nigeria. Consequently, Nigeria needs a lot more growth (like food); the Philippines needs a little more growth (like medicine); and Denmark needs a lot less growth.”

In a private interview, Smil explains the underlying message of Growth:

The simple fact is that … wealth and consumption does not necessarily improve life, equanimity or a sense of wellbeing…. At some point, the benefits of wealth and consumption level off in terms of morality and mortality, or health and education…. Many people in developed countries could halve their energy and material consumption…. They could cut down without losing anything important. People don’t realize how much excess they have in their lives.

About the award:
According to Eric Vettel, President of American Energy Society, “The Editorial Board gave its premier award to Vaclav Smil for his sweeping intellectual approach, his courage to confront questions rarely asked, his extraordinary grasp of an enormous subject, his methodical defense of an ambitious thesis with massive amounts of data. And, in recognition of a lifetime of literary achievements.”

About the author:
One of the world’s foremost thinkers on development history and a master of statistical analysis, Vaclav Smil is a distinguished professor emeritus at the University of Manitoba in Winnipeg, Canada. Over more than 40 years, his books on the environment, population, food and energy have steadily grown in influence. A self-proclaimed “slayer of bullshit,” his non-fiction was influenced by his first 26 years in Czechoslovakia “surrounded by Commie propaganda” during the era of the Soviet bloc.

In praise of Vaclav Smil:
• "There is no author whose books I look forward to more than Vaclav Smil." – Bill Gates
• “Vaclav Smil is a brilliant and influential thinker of energy – it’s past, present and future. His books have shaped our understanding on the realities and possibilities of energy transition.” – Jamey Rosenfeld, SVP IHS Markit, co-founder CERA
• "Vaclav Smil has quietly shaped how the world thinks about energy." – Science Magazine