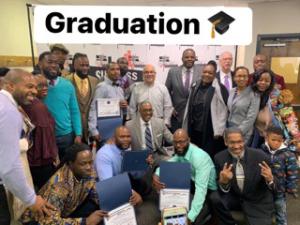 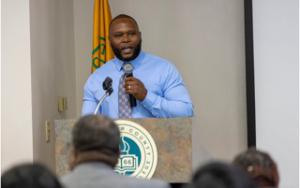 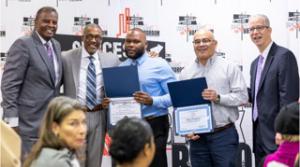 With 49,000 legal ways formerly incarcerated people are blocked from traditional employment, this course is a viable solution benefiting the entire community.

As a formerly incarcerated person, with very little prospects for employment, the Reentry Ventures course was just what I needed to begin to realize my dream of one day owning my own business”
— Emmanuel Ross

On December 7, 2019 at Mercer County Community College in Trenton, NJ, 16 formerly impacted individuals graduated from an intense 12 week entrepreneurial workshop sponsored by Wells Fargo Bank and the African American Chamber of Commerce of NJ. This workshop gives those that are rejected from normal hiring practices the chance to learn entrepreneurial skills. After the grueling 12 weeks, these future business leaders submitted their start up plans. Three of the students were selected to present power point presentations on their companies and they did not disappoint. From the tech start up company Slap Mobile to the medical training start up company Global Sterilization they showed why these type of programs work.

“As a formerly incarcerated person, with very little prospects for employment, the Reentry Ventures course was just what I needed to begin to realize my dream of one day owning my own business.” – Emmanuel Ross Owner, AQ Lawn Care & Maintenance

Reentry Ventures was launched in 2016 in partnership with From the Block to the Boardroom and Open for Business Ventures. Both companies shared the goal of helping returning citizens through entrepreneurship, development workshops and online support networks. With successful pilot programs launched in Washington. D.C. and Petersburg, Va., Reentry Ventures has been leading the charge for change and how we look at owners of start up businesses. Today 346 inmates at the Bureau of Prisons in Washington, D.C. are learning entrepreneurial skills using tablets with the Reentry Ventures online course created by CJ Meenan and Tracey Syphax. Collectively these two organizations value the benefits of creating revenue generating opportunities for formerly impacted individuals. Reentry Ventures entrepreneur workshop, models a smart on crime initiative, saves taxpayers money by reducing public charges post incarceration and also contributes to developing safer, economically viable communities. As a formerly impacted individual, Tracey Syphax is now the Executive Director of From The Block to The Boardroom LLC, a published author and dedicated advocate for criminal justice reform and smart on crime initiatives. CJ Meenan is a 30 year educator who has written several books on entrepreneurship.

“One of the most important needs for those reentering society is securing a job. However, legal and practical barriers (49,000 collateral consequences, to be exact), routinely prevent them from accessing employment that earns a living wage and more over, avoids poverty. As the number of people going to prison has risen in our country, so has the number of people leaving prison. Facing insurmountable challenges, the unfortunate likelihood is that many will end up back in prison which is why we created Reentry Ventures.” ~ Tracey Syphax

Mr. Syphax made history in 2011 as the first African American and formerly incarcerated individual to be named “Entrepreneur of the year” by the then 51 year old Princeton Chamber of Commerce. In 2014 out of a unprecedented 900 nominees through out the country Mr. Syphax was 1 of 12 White House “Champions of Change” for his work in Reentry & Employment. Mr Syphax was named one of 25 Most Influential African Americans in the State of New Jersey in 2016 by the South Jersey Journal and on December 22, 2018 outgoing former Governor Chris Christie gave Mr. Syphax a full pardon of his decades old criminal record.

Tracey Syphax
From the Block to the Boardroom
+1 609-209-3285
email us here
Visit us on social media:
Facebook
Twitter
LinkedIn