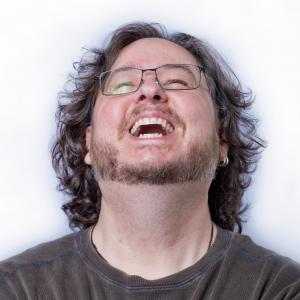 Tom's one of the most talented and respected game writers out there, with a wide range of experience in crafting game narratives.”
— Richard E. Dansky, Game Writer with Ubisoft

Abernathy is the Studio Narrative Director at ArenaNet, where he guides story development and execution on Guild Wars 2 and other projects. His major game credits include GW2, The Division, League of Legends, Crimson Alliance, Halo: Reach, The Saboteur, and Destroy All Humans! 1 & 2. A 20-year veteran of companies including Riot Games, Microsoft Studios, and the late, great Pandemic Studios, in 2009 Tom was named one of "The Gamasutra 20: Top Game Writers." His most recent film credit, Bad Country, was released in 2015 by Sony Pictures. You can follow his ill-advised ramblings on Twitter @tomabernathy.

The East Coast Game Conference (ECGC) is the leading forum for game industry professionals and students on the East Coast. ECGC’s goal is to provide opportunity for students, all levels of developers and related interactive entertainment companies to network, share industry trends, and build careers as well as look to the future of the industry. The conference features panels and lectures by game industry experts covering a wide variety of topics, and includes an exhibit hall, career lounge, and social events. Registration is now open for the best price register now: http://www.ecgconf.com/register/