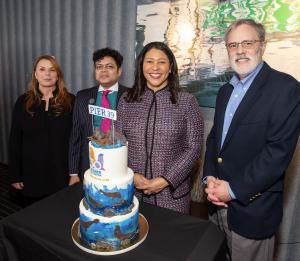 The amazing Sea Lions will dot premier spots across San Francisco after January 20th, where they will remain on display for the remainder of 2020. Conceived by the Smithsonian Affiliated Aquarium of the Bay, Sea Lion Center and jointly implemented with PIER 39, this art installation is part of the largest public STEAM (Science, Technology, Engineering, Art and Math) initiative in California.

California sea lions began arriving in PIER 39’s Marina in late 1989 after the earthquake Prieta Loma. They came sparingly at first, then soon began arriving in droves, quickly reaching more than 500 in number by January of 1990, eventually peaking upwards of 1400. With a protected environment and a plentiful supply of food from the Bay, the sea lions quickly made PIER 39’s K-Dock their new home. The boisterous barking pinnipeds have attracted millions of visitors from around the world over the decades. Their residency at PIER 39 is truly a natural phenomenon that brings joy to Bay Area locals as well as visitors from around the world annually.

“The Port is proud to host the sea lion installation all along the waterfront,” said Elaine Forbes, Executive Director of the Port of San Francisco. “We love seeing the majestic marine mammals in the water and are looking forward to seeing the artistic renderings dot the waterfront providing residents and visitors Inspiration and important information about climate change and sea level rise.”