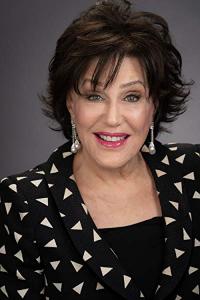 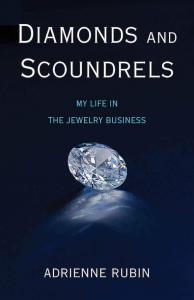 Diamond and Scoundrels: My Life in the Jewelry Business

“Because I was naive, I made many wrong decisions, and more than once I trusted the wrong people.” – Adrienne Rubin.

LOS ANGELES, CA, UNITED STATES, February 27, 2020 /EINPresswire.com/ — Adrienne Rubin once worked out of her car, pulling a suitcase loaded with silver, gold, and gemstone jewelry, which she sold wholesale to stores like Saks Fifth Avenue and Neiman Marcus. Adrienne has stated that by chance, on a vacation to Mexico, she fell into the jewelry business when she and her husband Stanford reconnected with the owner of a high-end silver store, and the store owner sought legal advice on problems with a Los Angeles Jewelry wholesaler.

“I was feeling bereft,” states Adrienne. “Our two children were in school, and my brief career as a school teacher had not satisfied my ambitions or creativity. My volunteer work with a local hospital to compile two cookbooks for fundraising had ended, and I was at loose ends. I thought, ‘I’ll sell silver jewelry for him!’ It wasn’t easy AT ALL, but I learned, and grew the business from part-time to full-time. I did it!”

It seems that this path was destined for Adrienne, as eventually the company mushroomed to include gold chains from the downtown LA Jewelry District, then gemstone jewelry found at jewelry shows in Hong Kong and Italy. However, this success came at a cost as Adrienne found herself to be naive enough to believe that anyone who bought her jewelry was as trustworthy as her father, a mistake that shaped Adrienne’s future. “Because I was naive, I made many wrong decisions, and more than once I trusted the wrong people,” claims Adrienne. “Yet each time I fell, I got right back up again. Giving up was never an option. To get to where you want to go, you cannot let fear of failure get in your way. For me, every challenge was an opportunity to soar even higher than before.” It's enough to say that after everything, Adrienne found out there are crooks out there, and she was adamant that dishonest people would NOT profit from her ever again.

From the age of two Adrienne grew up in Beverly Hills after moving from Chicago with her family. She graduated from Beverly Hills High School and spent a year in Lausanne, Switzerland, attending the School of Modern French where she learned to speak French fluently. She completed her college studies at UC Berkeley, and graduated from UCLA with a Master of Teaching degree. She married Stanford Rubin, a relationship that lasted more than 50 years. Adrienne and Stan raised their daughter Pamela and son Randall, and enjoy traveling with their three grandsons and cooking for them; Grand-Mère's most desirable meal is her tender brisket.

Adrienne has certainly made a name for herself in the jewelry business and as an author, but she also is involved in humanitarian efforts. In October 2019, the Los Angeles Arthritis Foundation honored Adrienne with the Jane Wyman Humanitarian Award as their top L.A fundraiser. For ten years now, Adrienne has been riding her bike in the California Coast Classic of the Arthritis Foundation, an eight-day cycling trip from San Francisco to Los Angeles along California's coastline.

“I was a total neophyte when the bicycle tour was proposed as a fundraiser. I had to purchase a bicycle and take lessons to learn how to operate the gears,” states Adrienne. “Approximately 350 cyclists participate each year. My husband has been challenged with arthritis since his 30s, and had both hips replaced plus numerous back surgeries for arthritis complications. He served as chairman of the national Arthritis Foundation board of directors. As he became less active in fundraising, I became more involved.”

“Diamonds and Scoundrels” is a memoir that follows Adrienne Rubin as she first begins in the jewelry business. When Adrienne Rubin enters into the jewelry business in 1970s Los Angeles, she is a maverick in a world dominated by men. She soon meets a young hotshot salesman who doesn’t seem to struggle at all, and when he asks her to be his partner, she is excited to join him. She doesn’t know him well, but she does know his father, and she believes he is as trustworthy as the day is long.

“Diamonds and Scoundrels” shows us how a woman in a man’s world, with tenacity and sheer determination, can earn respect and obtain a true sense of accomplishment. Following Rubin’s experiences in the jewelry industry through the ’70s, ’80s, and ’90s—with the ups and downs, good guys and bad—this is a tale of personal growth, of how to overcome challenges with courage and resilience. It’s a story for the woman today who, in addition to a rich family life, seeks a self-realized, fulfilling path toward a life well lived.

“Diamonds & Scoundrels is an incredible story of a woman who seemingly had it all but craved purpose. Through determination, boldness, entrepreneurial spirit and sheer will, she built a flourishing business, smashed barriers and proved that no dream is out of reach if you simply refuse to quit,” states Matt Iseman, host of American Ninja Warrior. It seems that this memoir from Adrienne Rubin is one you don’t want to miss out on.

Adrienne Rubin’s memoir, Diamonds and Scoundrels: My Life in the Jewelry Business is available through www.Amazon.com, www.target.com, www.walmart.com or www.barnesandnoble.com, and can be ordered through your local bookstore.