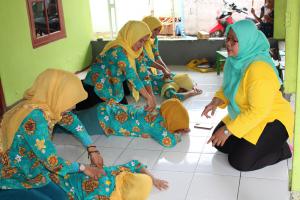 Volunteers of a local posyandu in a suburb of Jakarta practice administering assists. 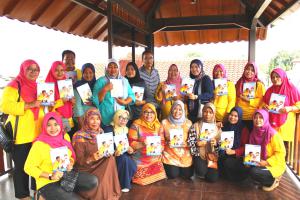 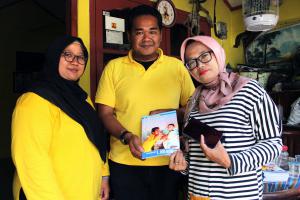 A Scientology Volunteer Minister and the women of local healthcare clinics mobilize to provide help to those affected by recent Jakarta floods.

But where he was on his own when he began providing relief in early January, today he is joined by dozens of volunteers he has trained in the basic skills of the Volunteer Minister (VM).

Surbakti has been working with the women who volunteer at local “posyadus,” an acronym for Pos Pelayanan Terpadu (integrated service post in Indonesian). Posyandus were created in the early 1980s to establish clinics staffed by volunteers who extend basic healthcare to the nation’s most vulnerable—the children and pregnant women. Although lacking funds and resources, the more than 260,000 posyandus comprise a grassroots institution that brings help throughout the country.

Over the past several weeks, Abdi has delivered dozens of seminars in local centers and has trained hundreds of local posyandu volunteers in the basic technology of Scientology assists. Assists are techniques developed by Scientology Founder L. Ron Hubbard that speed healing by addressing the emotional and spiritual factors in stress and trauma. Easy to learn, assists are vital skills for these volunteers, who can now use them to help those who come to them seeking relief.

Surbakti described one seminar where he was welcomed enthusiastically by a posyandu located in a village mosque. That morning, the volunteers were providing care to local babies. After they finished their work, the workshop began, with 10 volunteers taking part in the training. “Through the afternoon you could see a gradual change in the women—it was as though a burden was lifting and they were more at peace,” said Surbakti.

“I never thought I could feel like this,” said the leader of one of the posyandus who received an assist during a workshop. “This is new for me and it feels good.” “Thank you for the knowledge, which is very needed to serve the villagers,” said another volunteer, who now sees assists as a vital way to help the elderly and those who are disoriented.

One woman’s grandson came home sick with a fever which persisted for three days. After she learned to provide assists, she used the technique with him. When they started he was sweating profusely. Then he began to relax and he finally fell asleep. When he woke up, his temperature was normal. The next day he felt fine and returned to school.

“This is a necessary program and must be continued for my villagers,” said the leader of the neighborhood watch who organized a local workshop. “This is a form of humanitarian aid that will bring harmony and kinship to those who participate. It doesn’t take a lot to do this but the results are huge—I’m just beginning to realize how much this means.” The only problem the workshop posed to this village leader was that people were upset when they heard it was scheduled on a weekday because they couldn’t attend, so he resolved it by setting up another assist workshop for Sunday.

Posyandu volunteers who have trained on assist technology are now wearing the signature yellow T-shirts of the Volunteer Ministers movement. And while the new floods are a terrible challenge and hardship, the VMs are optimistic. Possessing technology they can use to provide relief, they too now live by the motto of the Scientology Volunteer Minister: “Something can be done about it.”

Watch films based on the tools of the Volunteer Minister on the Scientology Network.

Tools of the Volunteer Minister