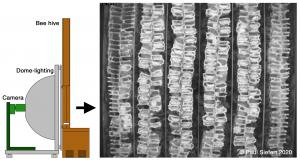 The brood area of the bees was filmed with a camera (green) through a dome lighting (grey). The specially designed hive (brown) was only 3.5 cm wide, so that the bees would raise young as quickly as possible (right). Credit: Paul Siefert/Bee Research Inst

Video of development – excerpts. AL: The queen lays an egg (arrow) in the cell. AR: The growing larva (arrow) is fed with jelly. BL: the metamorphosis includes the rupture of the larval skin (arrow). BR: The pupa develops. Finally, the adult bee hatches out of the cell.

Unique long-term videos show the bee nursery in the hive

FRANKFURT, HESSE, GERMANY, May 27, 2020 /EINPresswire.com/ — A newly developed video technique has allowed scientists at Goethe University Frankfurt at the Bee Research Institute of the Polytechnical Society to record the complete development of a honey bee in its hive for the first time. It also led to the discovery that certain pesticides – neonicotinoids – changed the behaviour of the nurse bees: researchers determined that they fed the larvae less often. Larval development took up to 10 hours longer. A longer development period in the hive can foster infestation by parasites such as the Varroa mite (Scientific Reports, DOI 10.1038/s41598-020-65425-y).

Honey bees have very complex breeding behaviour: a cleaning bee cleans an empty comb (brood cell) of the remains of the previous brood before the queen bee lays an egg inside it. Once the bee larva has hatched, a nurse bee feeds it for six days. Then the nurse bees caps the brood cell with wax. The larva spins a cocoon and goes through metamorphosis, changing the shape of its body and developing a head, wings and legs. Three weeks after the egg was laid, the fully-grown bee hatches from the cocoon and leaves the brood cell.

Using a new video technique, scientists at Goethe University Frankfurt have now succeeded for the first time in recording the complete development of a honey bee in a bee colony at the Bee Research Institute of the Polytechnical Society. The researchers built a bee hive with a glass pane and were thus able to film a total of four bee colonies simultaneously over several weeks with a special camera set-up. They used deep red light so that the bees were not disturbed, and recorded all the movements of the bees in the brood cells.

The researchers were particularly interested in the nursing behaviour of the nurse bees, to whose food (a sugar syrup) they added small amounts of pesticides known as neonicotinoids. Neonicotinoids are highly effective insecticides that are frequently used in agriculture. In natural environments, neonicotinoids arrive in bee colonies through nectar and pollen collected by the bees. It is already known that these substances disturb the navigational abilities and learning behaviour of bees. In a measure criticised by the agricultural industry, the European Union has prohibited the use of some neonicotinoids in crop cultivation.

Using machine learning algorithms developed by the scientists together with colleagues at the Centre for Cognition and Computation at Goethe University, they were able to evaluate and quantify the nursing behaviour of the nurse bees semi-automatically. The result: even small doses of the neonicotinoids Thiacloprid or Clothianidin led to the nurse bees feeding the larva during the 6-day larval development less frequently, and consequently for a shorter daily period. Some of the bees nursed in this manner required up to10 hours longer until the cell was capped with wax.

“Neonicotinoids affect the bees‘ nervous systems by blocking the receptors for the neurotransmitter acetylcholine,” explains Dr Paul Siefert, who carried out the experiments in Professor Bernd Grünewald’s work group at the Bee Research Institute Oberursel. Siefert: “For the first time, we were able to demonstrate that neonicotinoids also change the social behaviour of bees. This could point to the disruptions in nursing behaviour due to neonicotinoids described by other scientists.” Furthermore, parasites such as the feared Varroa mite (Varroa destructor) profit from an extended development period, since the mites lay their eggs in the brood cells shortly before they are capped: if they remain closed for a longer period, the young mites can develop and multiply without interruption.

However, according to Siefert, it still remains to be clarified whether the delay in the larval development is caused by the behavioural disturbance of the nurse bee, or whether the larvae develop more slowly because of the altered jelly. The nurse bees produce the jelly and feed it to the larvae. “From other studies in our work group, we know that the concentration of acetylcholine in the jelly is reduced by neonicotinoids,” says Siefert. “On the other hand, we have observed that with higher dosages, the early embryonal development in the egg is also extended – during a period in which feeding does not yet occur.” Additional studies are needed to determine which factors are working together in these instances.

In any case, the new video technique and the evaluation algorithms offer great potential for future research projects. In addition to feeding, behaviours for heating and construction were also able to be reliably identified. Siefert: “Our innovative technology makes it possible to gain fundamental scientific insights into social interactions in bee colonies, the biology of parasites, and the safety of pesticides.”

Goethe University is a research-oriented university in the European financial centre Frankfurt am Main. The university was founded in 1914 through private funding, primarily from Jewish sponsors, and has since produced pioneering achievements in the areas of social sciences, sociology and economics, medicine, quantum physics, brain research, and labour law. It gained a unique level of autonomy on 1 January 2008 by returning to its historic roots as a "foundation university". Today, it is one of the three largest universities in Germany. Together with the Technical University of Darmstadt and the University of Mainz, it is a partner in the inter-state strategic Rhine-Main University Alliance. The Bee Research Institute is a subsidiary of the Polytechnical Society Frankfurt am Main and has been operated jointly with Goethe University since 1963. Internet: www.goethe-universitaet.de