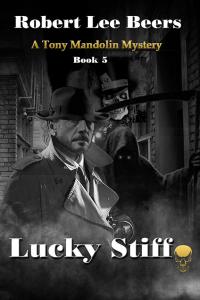 I have a new hero, Tony Mandolin, Private Eye Supreme.
This story has it all, a good detective story, a mystery to solve, a little fantasy, and good clean fun.”
— Paul J. for Readers Favorite

SAN FRANCISCO, CALIFORNIA, USA, May 29, 2020 /EINPresswire.com/ — Robert Lee Beers is the author of the popular urban fantasy noir series The Tony Mandal Mystery. A ten-book series, Robert Lee Beers had the first four books beautifully produced into audiobooks with the help of Graphic Audio, an audiobook production company. But now, Robert Lee Beers is looking for a change of pace for book five in the series, Lucky Stiff.

In Lucky Stiff, readers quickly discover someone is messing around with Luck. In a city with some of the largest underground gambling mobs in the world, Tony Mandolin, San Francisco’s supernatural shamus, finds himself neck-deep in Cartels, Triads, and Russians. Soon the world-weary, cynical private investigator winds up in a card game where the loser has to give up a whole lot more than just his chips.
While the previous audiobooks featured a full-cast and sound effects mirroring old-time radio shows, each was an abridged version of the actual book. But now, Robert Lee Beers is partnering with Chris Herron, an accomplished narrator, and host of Tall Tale TV, to produce a full-length audiobook for Lucky Stiff. In this project, Chris Herron will narrate every word of Lucky Stiff and format it for enjoyment as an audiobook. A master at voice-over, Chris Herron brings a reputation for being the entire cast on his own and will use his voice talents to bring scenes and characters to life in exciting new ways.
A sample of chapter one’s narration is available on the Kickstarter campaign page. Money raised will be used to fund the production of the Lucky Stiff audiobook, and exclusive rewards will be made available to early backers as a token of their support. For a limited time, backers can receive a copy of Lucky Stiff in eBook format for just $5 or pledge additional support to receive other books from The Tony Mandal Mystery series. Some rewards are limited, so act fast. The Kickstarter campaign is located here: