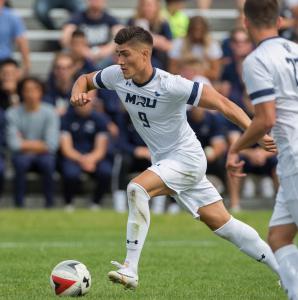 CALGARY, OFFALY, CANADA, June 5, 2020 /EINPresswire.com/ — Dane Domic, 21, recently announced that he’ll start working on programs to help support aspiring young athletes to advance their careers in the football industry. The Canadian football player has managed to climb the ranks over the last few years and is ready to help those who want to build a career out of the sport.

Domic isn’t new to the football scene, in the last year he’s played for the Mount Royal University (MRU) Cougars, giving him a chance to showcase his talents. The young athlete of Croatian descent has managed to establish a solid foundation throughout his career. His open-minded approach to the sport has given him the opportunity to play for various clubs, both locally and also at an international level. Domic recently shared the great news of his philanthropic views to start giving back to the community. “I have been playing football for some time now, and my journey hasn’t been without hurdles. It’s only been my first year at MRU and it’s time that I give back to those who want to make a name for them in the sporting industry,” shares Domic.
Although only 21 years old, the young sports star and university student has built a network of well-known and influential people. He doesn’t shy away from the challenges his new endeavours will bring, as he opens his heart to share his skills and knowledge with others. Domic hasn’t said when he plans to launch his programs, as he’s trying to obtain enough resources and information before setting off. Domic tells us, “the idea is to share my knowledge and skill with others, I’ve learned so much from other great coaches and players, and I’m extremely grateful for it. I want to create a platform where others, just like me, can feel welcome, learn something, and master their talents.”

It’s good to know that young athletes are trying to become more engaging with their supporters and the community. Domic has trained with Manchester City U16 and played for Dundee United in Scotland. A few years ago he managed to land a position with the Jong Sparta Rotterdam that played in the 4th Holland division. His potent football talents root from his father Davor Domic who played for West Ham and VfB Stuggart. The young man isn’t easily backing down from anything crossing his path and keeps focus on what’s important to him.

He shares assertively, “I’ve seen how much work goes into building a great network of contacts and being recognized. In the beginning, it’s difficult, and you doubt yourself, but that’s what makes it so much more thrilling. Building a network of young players will give the industry a much-needed boost. More international games, better domestic support, and an overall increase in sportsmanship between players and teams,” tells Domic.

The last few weeks have seen many industries around the world facing the hard impact of the global pandemic and as many are making a comeback, Canadian football players will hopefully soon make a return to the field. “Now is the time to think differently about the sport in terms of safety and getting people involved. I think there will be a strong focus on how young players can use the excess time to practice more efficiently. There’s an opportunity for everyone to become the best at anything they do, it’s about finding and maintaining a good balance,” Domic shares notably.

As a person who spends a lot of his time either with his family or practicing, Domic hasn’t shared many detailed specifications with others about his new kindhearted endeavors. These new ventures will surely set him aside from other industry competitors, as he’s taken the chance to not only play a sport but share it on a grander scale. As we battle onwards with the global pandemic, Domic has given light to new and innovative ways to share generosity. The Canadian Soccer Association recently outlined new regulations and guidelines as part of their Safe Sports Roster, ensuring players can soon start returning to the field.