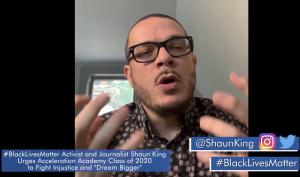 King tells graduates — most of whom are Black or Latino — "You are survivors, you are overcomers. The world is counting on you to be a force for good."

“I implore you students, I beg you, to never stop dreaming,” said King. “In this moment, I need you — the world needs you — to believe in yourself.”

King is an activist and journalist who has played a key role in spotlighting allegations of police violence against Black Americans including George Floyd, Rayshard Brooks, Ahmaud Arbery, and Breonna Taylor. With more than 3.6 million followers on social media, his is an influential voice — and a source of inspiration for the graduates and current students of 10 Acceleration Academy locations across the nation.

“Shaun King’s message couldn’t come at a more critical time,” said Dr. Joseph Wise, co-founder and CEO of Acceleration Academies. “Over the Independence Day holiday, the president condemned those who seek to reverse this nation’s bitter tide of racist injustice. In contrast, King celebrates those who are working hard for a more just America — a message that will inspire our graduates as they enter the world to become the generation of lasting change.”

Acceleration Academies partners with local public school districts to re-engage students who have dropped out or are at risk of doing so. With a blend of online learning and in-person academic, social and emotional guidance, the programs provide an individualized path to a high school diploma — a goal many thought they’d never achieve.

“I think 2020 has been one of the most difficult years in modern American history,” King said in his speech, which was recorded and distributed to graduates and current students and shared on social media channels. “But you’re here. You made it and that says so much about you and so much about the people who’ve surrounded you with love and support all these years.”

King thanked the students for supporting efforts to call for justice in the deaths of Black people in police custody in recent months, saying, “when we organize our efforts, we can make real change.”

He recalled being a 15-year-old boy — “just a little younger than you” — growing up in rural Kentucky, and being assaulted by a group of racist high school classmates. The attack left him with fractures in his face, ribs and back, injuries that required him to undergo three spinal surgeries. “I was broken, physically and emotionally.”

“It was the lowest, most brutal moment of my life,” he continued. But it was also the experience that led him to a life of fighting against injustice. “What was meant to destroy me actually burned into my heart a passion for justice.”

He urged the graduates — many of whom have first-hand experience with racism and violence — to tap that experience for inspiration to make their lives, and their world, better.