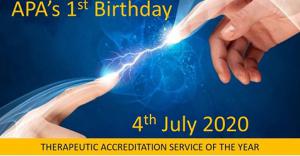 The inaugural event was attended by counsellors, therapists, and coaches from different countries, along with invited speakers.

As an international advisory group, APA is a phenomenal network of counsellors, therapists, and coaches – whose overarching aim is to create an organisation that its members can be proud to be a part of.

All APA members are professionally qualified individuals with extensive experience. The members, alongside its founders Dave Sleet and Siobhain Crosbie, help run the organisation ethically, morally, and in line with best practice.

APA’s collective aim is to create a directory of phenomenal professionals, combined with providing a membership beneficial in multiple ways to each individual member, and a directory that any client can be confident in their choice of therapist or coach.

Professor Windy Dryden was one of the speakers during the event. Professor Dryden highlighted the importance of networking within the therapeutic community in order to share and inform each other’s practices.

Professor Dryden is one of the leading practitioners and trainers in the UK in the cognitive behaviour therapy (CBT) tradition of psychotherapy. He is best known for his work in Rational-Emotive Cognitive Behaviour Therapy (RECBT). He has been working in the field of counselling and psychotherapy since 1975 and was one of the first people in the UK to be trained in CBT.

Siobhain Crosbie, co-founder of APA, shares: ‘The list of the people we are grateful to is endless. So this is not a first or last. We are exceptionally grateful to all who attended and celebrated with us. From the bottom of our hearts, we are immensely grateful to all those that have shared our passion for change, a desire to create a new future.

Owing to its commitment to foster a responsive and inclusive community for therapists, coaches, and counsellors APA was the recipient of the Corporate LiveWire Prestige Awards 2019–20.