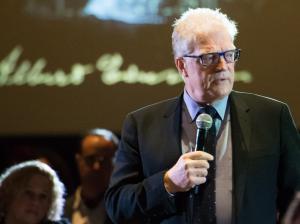 Robinson’s G100 Vision for the Future is being released publicly for the first time, in his honor

He left an indelible mark on humanity. Particularly now, when thought-leadership, creativity and innovation is greatly needed, we hope that the impact of his Education theories will be a guidepost”
— Ambassador Ido Aharoni, Co-Founder and Global Ambassador of G100

NEW YORK, NY, UNITED STATES, August 31, 2020 /EINPresswire.com/ — The Genius 100 Foundation (G100) will celebrate the life and legacy of Sir Ken Robinson, the world’s most well-known education luminary, by releasing his vision statement included in the 3D publishing milestone Genius: 100 Visions of the Future, publicly for the first time, as well as his keynote address at the inaugural G100 event. Sir Ken was a founding Visionary of this globally renowned curated community.

It is no accident that Sir Ken Robinson’s TED talk entitled “Do Schools Kill Creativity” is the most-watched of all-time with more than 66 million views. “We were fortunate to be given this gift of his moment. Only recently could an individual so rare have a conversation with so many so quickly,” Richard Saul Wurman, Creator TED Conference. “He was able to give these millions of individuals permission to embrace their curiosity. He was able to communicate his vision to choose memory over memorize and to hug his waking dream of a land, of a life, of a world in which we can individually embrace learning. The love that comes from this message is only in its infancy with his passing. This moment of the few moments we will remember is a rare gift.”

His influence on the thinking of educators around the world is unparalleled in history and his legacy of critique about schools will have a lasting and profound impact for decades to come.

“Sir Robinson was a very special and influential member of our community,” states Ambassador Ido Aharoni, Co-Founder and Global Ambassador of G100. “He was with us from the beginning. His passing has left such an indelible mark on humanity. Particularly now, at this time when thought-leadership, creativity and innovation is so greatly needed, we can only hope that the impact of his theories on Education will be used as a guidepost, as well as an opportunity to honor him by reflecting and acting on his wisdom.”

G100 was born out of the centennial celebration of Einstein’s Theory of Relativity. The organization, first called The Einstein Legacy Project (ELP), was launched in 2017, with a celebration titled ‘Century of Genius’ which attracted some of the world’s brightest and most innovative minds, including many of the 100 visionaries, such as Deepak Chopra, Ruth Bader Ginsburg, Michael Bloomberg and Wynton Marsalis and, of course, Sir Ken Robinson, who contributed their vision statement in the publishing milestone Genius: 100 Visions of the Future.” In 2018, the ELP became the Einstein Foundation strictly used for academic purposes at the Hebrew University. And, in 2019, the G100 was created.

In honor of Sir Robinson, G100 would like to share, for the first time publicly, his vision statement that is included in the 3D publishing milestone, Genius: 100 Visions of the Future, as well as excerpts from his address at the ‘Celebrating a Century of Genius’ weekend event in Montreal, Canada.

“It is imperative that we continue strive to think outside the lines and innovate,” states Aharoni. “as well as share the prolific words of wisdom from some of the world’s most brilliant minds. It is through the examples set by Einstein and all those that have come after him, including our friend and esteemed colleague, Sir Robinson, that we will continue to make the world a better place.”

About G100
Based in Toronto with a global footprint, Genius 100 Foundation is an active and engaged community of exceptionally imaginative and impactful human beings. These accomplished, compassionate minds have joined together to re-imagine the future – and to implement creative initiatives to improve our world. These great visionaries raise the bar on what is achievable within their fields. Collectively, in collaboration, they can make the impossible possible.

G100 Mission
To support humanitarian and environmental initiatives within the G100 community through funding and partnerships.

Genius 100 Foundation is a registered Charity in Canada and a 501c.

The Making of the 3D Publishing Milestone: Genius: 100 Visions of the Future