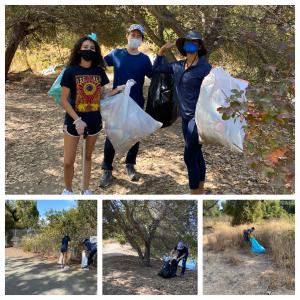 National CleanUp Day volunteers filled many bags of trash along the Alameda Creek in the Niles area. 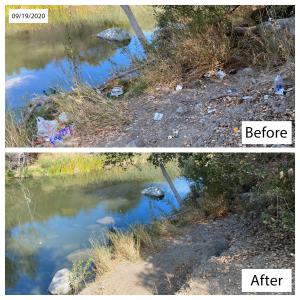 A large amount of trash littered the area for at least a month prior to being cleaned up today. 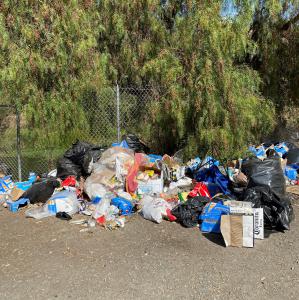 A pile of trash has reportedly been abandoned at the side of this fence for at least two months.

Residents picked up trash along the Alameda Creek trail to the east of the Niles Canyon Staging Area parking lot on the morning of National CleanUp Day 2020.

We need to have more ‘Leave No Trace’ signs posted in English and Spanish or, better yet, language-less signs with pictures but without any words.”
— Justin Sha

FREMONT, CA, UNITED STATES, September 20, 2020 /EINPresswire.com/ — This year’s National CleanUp Day occurred on September 19, 2020. The national holiday is celebrated annually in the United States on the third Saturday of September. It promotes both organized and individual cleanup events and volunteering to keep the outdoors clean.

With gloves, trash bags, and masks in tow, Fremont residents came to the Alameda Creek at the Niles Canyon Staging Area to join a cleanup event hosted by Justin Sha’s Fremont mayoral campaign.

“The last time they tried to clean up the trash was when they brought a truck about two months ago,” said a local Fremont resident who was walking her dog. “They can’t agree on whose jurisdiction it is to clean up the trash.” This statement was made in reference to the City of Fremont, the Alameda County Water District (ACWD), and the East Bay Regional Park District (EBRPD).

Local residents told the campaign today that many reports have been submitted to the relevant agencies, with no action seemingly taken. Justin Sha has also personally reached out to elected officials about this issue.

“The solution lies at the cross between having an education campaign and having the available means for trash disposal,” said Justin Sha, candidate for Fremont Mayor. “I understand why other environmentalists and residents have been frustrated. I am frustrated too. We need to have more ‘Leave No Trace’ signs posted in English and Spanish or, better yet, language-less signs with pictures but without any words.”

“I understand that some signs were put up about three months ago, but I am hopeful that given additional notice and opportunity people will pick up after themselves,” continued Justin Sha. “The responsible agencies do need to clean up the trash that has piled up as soon as possible, however. It is a hazard, and it sends the wrong message about enforcement, compliance, and government accountability.”

Evidence from the Fremont event for National CleanUp Day 2020 showed accumulation of trash over the years, as well as over the past month. A huge pile of trash that exists next to a fence is reported by local passerby to have been sitting there for months. National CleanUp Day volunteers found styrofoam plates with half-eaten meat that was molding as well as very faded plastic and glass bottles that showed years’ worth of plastic photodegradation. Other items include: cigarette butts, clothing items, diapers, lingerie, fabrics, chip bags, beer boxes, bottle caps, and other non-biodegradable plastics, styrofoam, and broken glass.

“Unfortunately, there was just so much. We filled up over six trash bags’ worth of litter and garbage, and a lot of it was small trash, including wrappers and bottle caps. But there is ultimately only so much that we were able to do as volunteers for National CleanUp Day,” said Justin Sha. “While our campaign continued to communicate to volunteers, including myself, to not pick up anything that looked potentially biohazardous, I did personally pick up several diapers, including one that was partially in the water. We prioritized cleaning up sections adjacent to or close to the Creek.”

“Some of the stuff here was really disgusting,” said volunteer Jeanna Thottungal, who brought a mechanical grabber reacher tool to pick up trash.

After Justin Sha and a few volunteers surveyed sites earlier this month, a local resident emailed Justin Sha’s mayoral campaign to inform Justin Sha that he had been in touch with the ACWD. He reported that the ACWD responded right away and wanted more pictures, given that it is their water. But while ACWD is ostensibly working on a solution to retrieve the garbage, he was not sure how long it would take for them to actually take any action.

“This water flows all the way down to the Bay, and I definitely saw a metal device that looks like a washing machine but with a lift in the middle of the Creek,” said volunteer Shubh Goel, an Irvington High School student. “I don’t understand why people think this is okay. We just had these crazy fires, and I really think Fremont needs to do more to protect our important ecological watersheds.”

Justin Sha has signed the Green New Deal Pledge and has committed to using the office of Mayor to champion and advocate for a Green New Deal, both nationally and for the Bay Area.

The Justin Sha for Fremont Mayor campaign organized this event to spread awareness about environmental stewardship and the importance of understanding our own ecological footprint as a society.

Justin Sha is running for Mayor of Fremont, CA. Sha is VP of Customer Success at Droisys, a global technology company headquartered in Fremont, and he teaches business law at Ohlone College. Sha is an involved community member, serving on local nonprofit boards. He is the Chairman of Asian American Millennials for American Advancement as well as a member of the Ohlone College Foundation Board. Sha received his B.A. from Dartmouth College and his J.D. from UC Hastings College of the Law.