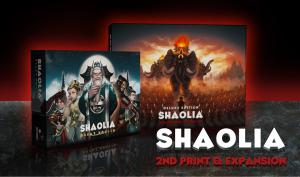 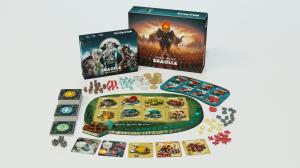 SEOUL, SOUTH KOREA, September 21, 2020 /EINPresswire.com/ — Shaolia, the fast-paced head to head and strategic game of fantasy kingdom building has recently made it public that they will be launching a Kickstarter campaign on 23 September 2020. Followers and backers will be able to receive exciting expansion offers, as the company is looking to grow their market, while also presenting exciting new additions to the game.

The card game, which is constructed around fantasy kingdom building and dice-based tactics is looking to release an even more strategic and in-depth game. The announcement of their Kickstarter campaign has many in the industry talking, as the company will be offering a promo card pack worth $7.00 for free to all backers. The Kickstarter campaign is a smart move, as this will be a way for Bad Comet and Shaolia to build its influence in the gaming industry, forming a strong connection with early backers and creating lasting players. A spokesperson for Shaolia shared that, “The Kickstarter campaign is a way for us to show players how eager we are to expand and grow our game. With this said, it’s also a modern approach to reach more people and build a whole new era of players.”

Last year, Bad Comet successfully launched its first game, Shaolia: Warring States, raising $86,694 on Kickstarter. Similar card games are currently available on the market, but the Shaolia game pack has both a tactical approach, while still offering fun gameplay for both novice and veteran players of the game. The game is filled with different characters, buildings, and an array of different modes. Previous players have shared how interconnected the mechanics and theme of the game is, saying how it takes you on a journey of exciting experiences, while still using your critical and strategic thinking to win opponents.

“What makes this game such a success is that even though many hardcore gamers dig the strategic dept of the game, it is simple enough for your non-gaming friends, beginners, and pros to enjoy. Some may find it quite easy in the beginning, but as soon as you get into it, the real fun begins,” shared the spokesperson.

This will be the first major expansion for Shaolia, as they are constantly looking for new and improved ways to keep the game fun and entertaining. The company has in the past shared that they are looking to build and create a more robust gaming experience, adding replay value even after completion of the game. A host of new characters and buildings can be added to the game, growing it from a straightforward card game, and raising the intensity of each level as one progresses.

Other fantasy card games such as Keyforge, Faerie, Arkham Horror, or Android: Netrunner are some of the most popular fantasy card games on the market. These card games can cost players anything from $39.99 to almost $149.99 per set, with extra decks, dice, and pieces that can be purchased at additional cost. The Shaolia team has not yet announced what players will be paying for their game, but with the company looking to launch their Kickstarter campaign in the coming week, many are hopeful that it would be offered at a much more affordable price.

The spokesperson went on to claim “Shaolia isn’t your regular fantasy card game, yes, there are many other similar games on the market, but we want to bring a new and stimulating offering to the market. For years, people have been stuck with over-hyped and expensive card games, that all turn out the same in the end. We’ve looked at all the details and put in extra effort to ensure players will always be engaged, no matter how many times you play it.”

As time starts ticking for Shaolia to launch its Kickstarter campaign, a host of excited players are hopeful that it will be something that can fuse and change the fantasy card game industry.

For more information on the Shaolia fantasy card game, visit their website, https://badcomet.co/shaolia