Andrew Galliardo’s Letters back home Come to life on Instagram 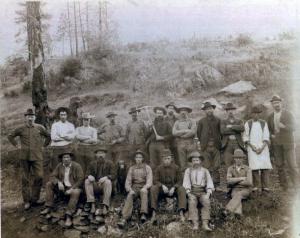 Many came west to Angels Camp in 1850s to seek Gold

Just in Time for Back to School (Or Not): Discover what Life was really like during California’s Gold Rush

We may have to wait to re-open the museum, but it occurred to us that for everyone stuck at home more than usual, we could bring history directly to them by creating a simple Instagram page”
— Karen Strand, President, Angels Camp Museum Foundation

ANGELS CAMP, CA, UNITED STATES, September 28, 2020 /EINPresswire.com/ — The Angels Camp Museum had just taken delivery in March of new Acoustiguide handsets for the upcoming launch of the new self-guided audio tour of their 3-acre campus full of Gold Rush era history when the stay at home order was put in place. Since then, the planned April 11 launch date has come and gone and at present at least in California, only outdoor museum exhibits are allowed to be open.

The new tour, funded and developed by the Angels Camp Museum Foundation that supports the work of the museum, wasn’t the only project they had developed. Last year the Museum was fortunate to acquire six letters from a Massachusetts family whose Italian Immigrant friend, Andrew Galliardo, moved to Angels Camp and penned the letters about what life was like in the small mining town from 1856-1858. From these, the foundation created a companion track to the audio tour that tells the story of Andrew in his own words, with historical facts and period sound effects, narration and voice actor playing Andrew Galliardo. The foundation members thought making it available to the public at large during this pandemic would be one way people could still enjoy history and raise awareness about the museum. To do this they used Instagram Stories to knit together the audio visitors to the museum would hear, and posted the story to their new Instagram Page. Each segment is less than 5 minutes long but transports you to an entirely different time and place.

“The Gold Rush is more than just a footnote in America’s history,” said Jim Miller, Education Coordinator for the Museum. “Imagine how different our country might be had the news of the discovery of Gold not been announced widely by President Polk, news that sparked the rush to California in the first place hastening its statehood.”

During the course of the story, audiences will learn important details surrounding the 1848 discovery of Gold in California. For example, in March 1848, there were roughly 157,000 people in the California territory; 150,000 Native Americans of varying tribes, 6,500 persons of Spanish or Mexican descent known as Californios and fewer than 800 non-native Americans. Just 20 months later, following the massive influx of settlers, the non-native population had soared to more than 100,000 people – a diverse blend of young and old but largely male persons from all over the country and the world. By the mid-1850s, there were more than 300,000 new arrivals—and remarkably, one in every 90 people in the entire United States was living in California.

“We may have to wait to re-open our doors to the public at the museum itself, but it occurred to us that for everyone stuck at home more than usual, we could bring history directly to them by creating a simple Instagram page,” said Karen Strand, Angels Camp Museum Foundation President.” “It is a true story, and since the story is told in audio format with sound effects, it invites us all to close our eyes and use our imaginations as Andrew’s story unfolds.”

The Corona Virus has hit cultural institutions hard all across our nation. According to the International Council of Museums, of the world’s museums that are currently shuttered because of the coronavirus pandemic; one in 10 may not reopen. The Museum Foundation hopes that if you like Andrew’s story you’ll make a donation in whatever amount is possible to support their efforts, but a donation is not necessary to access and enjoy the story.