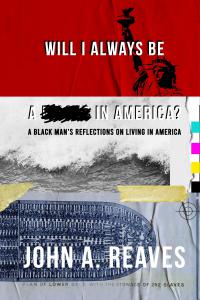 This collection of ten essays reflects on the issues faced by people of color and offers recommendations towards solving racial inequality in society.

I felt that death was an equalizer for humanity, but even with death, some people still believe people of color are not worthy of living. To those who think this, I say we want to live!”
— John A. Reaves

We cannot control who and what we see, but we can control "…how we respond” once we see them.

Charlotte, NC – September 28, 2020 – In response to the racial disparity that is ever-present in America, John Reaves has released a book titled “Will I Always Be A ____ In America? A Black Man's Reflections on Living in America.” This collection of ten essays reflects on the issues faced by people of color and offers recommendations towards solving racial inequality in society.

With the book, John Reaves hopes to elevate the voices of people of color, Black men specifically, in sharing their stories and thoughts on racism in America. Reaves selected the essays in part due to their relevance, as every one of them discusses issues currently experienced by people of color on a daily basis.
These essays confront some of the most pressing racial inequalities in the United States, from police brutality to gentrification. Essay titles include "We Want to Live," "My First Confrontation with a Police Officer: Three Decades Later, I Cannot Forget It," and "The Neighborhoods I Live and Run Through: Are They a Symbol of Optimism or a Death Trap?” Every essay ends with a question to answer, encouraging thought and introspection from readers of all backgrounds.
“Will I Always Be A ____ In America? A Black Man's Reflections on Living in America” seeks to not only address racism in America but to also provide possible solutions. Reaves hopes that these essays will aid in carving a path forward and that people of color won’t be experiencing the same issues for another century.