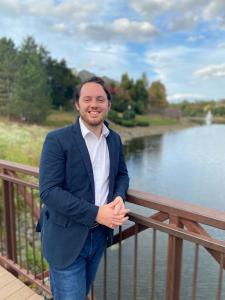 As a teacher, I know directly how Richmond impacts not only our kids, but our teachers as well. Parents have to decide whether to put food on the table, or pay for child care. I can't just watch.”
— Mike Allers, Jr.

Northern Virginia Teacher Announces His Candidacy for the House of Delegates

On Tuesday, Northern Virginia Teacher and Virginia Political Commentator Mike Allers Jr. announced his intention to seek the Republican nomination for the 50th District State House Seat. If Mr. Allers Jr. is successful in securing the Nomination, it would directly pit him against controversial figure and incumbent House Member Lee Carter (D-Manassas) in 2021, should he seek reelection.

“As a teacher, I know directly how Richmond impacts not only our kids, but our teachers as well. Let’s face it- pay for Teachers isn’t competitive in Virginia. More people are moving out of this state, than moving in […]and parents have to decide whether to put food on the table, or pay for child care. […] I couldn’t just sit back and watch this happen. I had to do something-I had to jump in. This is why I’m running for the House of Delegates.” Allers Jr. said in an online video.

Mike Allers Jr., 28, is a newcomer to running for political office. Mr. Allers Jr. has taught pre-k in Orange County, as well as 4th and 5th grade in Petersburg, VA. He now teaches elementary school in Sterling, VA, and is a resident of Manassas City – where he lives with his wife. In 2019, Allers Jr. joined the Center-right Blog Bearing Drift, where he provides political commentary and hosts a podcast, designed to bring the biggest names in politics together, regardless of their side of the political isle. He also briefly worked as a Reporter for the Regional News Site, The Potomac Local.

“This is not going to be a campaign of simply Red vs. Blue, or who can own who on Twitter. This is going to be a campaign for ALL who want to roll their sleeves up and do the work, not just talk or tweet about it. I’m going to need your help! It’s time we take Richmond to School!” Allers Jr. released in a statement. Allers is the first candidate to announce his intention to seek election next year in HD50.