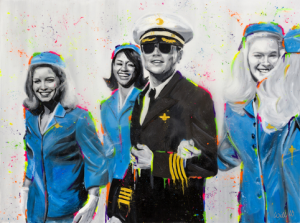 Catch Me If You Can

Will McNally is fast becoming one of the biggest names in contemporary art – and his rise to stardom all began after he did a painting for his auntie.

LONDON, UNITED KINGDOM, October 21, 2020 /EINPresswire.com/ — Will McNally is fast becoming one of the biggest names in contemporary art – and his rise to stardom all began after he did a painting for his auntie.

The artist may have caught the attention of Hollywood film studios, professional footballers and music superstars, but none of that would have been possible if he didn’t do a charity painting that made him realise art wasn’t just his passion, but his calling in life.

Will explained: “When I was 15, I used to go to my auntie’s house, and one time she was doing a charity event and looking for ways to make money. I told her I could paint something, which surprised her – at the time I’d never tell people I liked to paint, as I was worried people would think I was a geek, or nerdy, but at home I was getting stuck into it and it became a real passion.

“So we went and bought two canvases and some paint, and then I started painting the East End gangsters the Krays. My auntie couldn’t believe I could paint something like that, so we went to the charity with it, and it sold for a few hundred quid. At the time, as a young lad, I was thinking that was a lot of money, and that was the drive when I was that age, thinking about the amount of sweets I could buy with that.

“But I still kept my painting quiet after that, as I was a kid and worried that painting would attract certain attention, with people calling me a nerd or a geek. It’s only in recent years where I’ve realised life is too short, and that I shouldn’t shy away from something I love.”

This all happened in a fateful moment, which convinced him he was taking the right path.

“I was in my overdraft when I was thinking about focusing on painting, and was looking for a sign to convince me this was the right idea – and I’ll never forget, an hour later, receiving a message on Instagram asking me if they could buy a painting. I knew from that moment this was my calling, and I donate to charity from every piece I sell; I know I can make a living from it, but I can also use it to help give back.”

Will is currently working on a series of gangster inspired pieces, which will offer a unique look at real life mobsters and famous big screen anti heroes.

“It’s now mad that, seven years on, I’m working on a gangster series, after doing the piece on the Krays for a charity event. It’s gone full circle, I truly believe this is my calling.”

To find out more about Will McNally and to arrange to view his collection, visit https://www.einpresswire.com/contact_author/528736575.