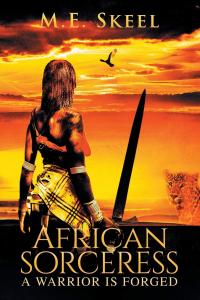 African Sorceress: A Warrior Is Forged 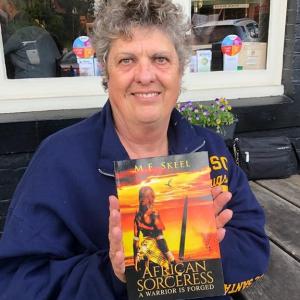 My book is about the triumph of the human spirit over great evil. I hope you enjoy this series and learn about this time and place in history.”
— M.E. Skeel

AUSTRALIA, December 4, 2020 /EINPresswire.com/ — Award-winning author M E Skeel subverts genre expectations with "African Sorceress – A Warrior is Forged." No white saviors are needed in her rousing story of a young girl who embraces her people's rich African heritage and their mystical practices to fight the slave trade emerging in West Africa during the 1600s.

Historically, the Atlantic Slave Trade trafficked in people taken from Central and West Africa, sold to Western European slave traders to meet the colonial and imperial powers' demand for labor to produce crops like sugar in the New World.

Skeel's story follows a young girl whose father is taken by such slavers. Distraught, Kisa does everything in her power to find her beloved father. She trains in bush medicine and magic with her tribe's sorceress. She even learns how to fight from a mysterious Black Samurai.

"In 2014, I visited the infamous slave castle, Elmina, in Ghana. It was horrifying to see how people were treated during the Atlantic slave trade. My guide told me that his tribe had been saved by a great 'prophetess' who used magic. I was so intrigued by this that I went on to write not only this book but a whole series about my heroine, who goes on to fight the slave trade on the Sahel, in Angola and then in Brazil and the Caribbean." Skeel says, explaining the inspiration for her story. Moreover, the research she undertook for her story also led her to many realizations.

"I found that women were an integral part of African societies, many of which were matrilineal. The so-called witch doctors had extensive knowledge of bush medicine and were important members of their communities. The cultures were incredibly diverse and rich. I want to share my knowledge of this continent before the slave trade in order to address, in a small way, the damage that the Atlantic slave trade and colonization did to these amazing cultures."

Readers will see Kisa's journey from childhood to the savior of her people. Moreover, with her narrative, Skeel portrays the hidden history of Africa. She dispels the common notion that in the 1600s the land was merely a "dark continent" without culture or history, which she says is something neglected in conventional history books. She corrects this by showing the historic cultures, which were diverse. And she shows how women played many important roles in these societies. With "African Sorceress – A Warrior is Forged," she not only portrays a heroine with magical powers, but also the rich history and lifestyles of a continent torn apart by the African slave trade.

"A history that deserves to be told," Skeel says. "My book is about the triumph of the human spirit over great evil. I hope you enjoy this series and learn about this time and place in history."

About the Author
Margaret E. Skeel is an award-winning author, biologist and high school teacher. She lives in Australia where she researches her historical fiction and wildlife adventure novels. When she is not writing she enjoys life in the Australian bush, rescuing injured and orphaned wildlife, kayaking and visiting her grandchildren.