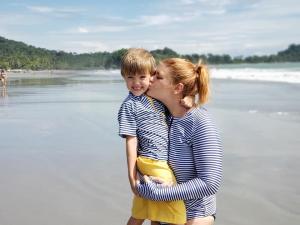 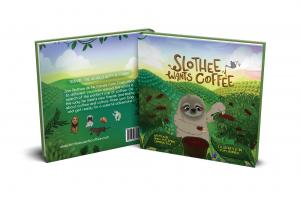 In Slothee Wants Coffee, Slothee travels from Costa Rica to Brazil, Colombia, Indonesia, Ethiopia, and Hawaii in search of the perfect cup of coffee. On the way, he meets new friends and learns about coffee and culture. This book is on an educational, yet fun adventure.

On a trip to Costa Rica, the duo fell in love with sloths, seeing them in the rainforests and watching their slow, yet smooth movements. After taking a coffee (and chocolate) tour, they learned that there is much more than just brewing a cup of coffee. From bean to your cup, it is a process. They wanted to bring that process to life and add fun facts in the book that kids can understand and relate to. Cameron also came up with the name and idea for the book during the adventure!

Throughout this book, they hope to excite children and parents to explore cultures outside of the norm. Not only will you meet Slothee's friends, but you will learn about coffee, culture, and friendship.

Slothee Wants Coffee is currently available for pre-order and has been awarded a “Project We Love” on Kickstarter: https://www.kickstarter.com/projects/slotheewantscoffee/slothee-wants-coffee

Nikki is originally from Metro Detroit but moved to Arizona in high school. She attended Northern Arizona University in Flagstaff, receiving a Bachelor's in Criminal Justice and Criminology. Nikki also earned a Master's in Forensic Psychology from Argosy University. However, she realized her heart wasn't with her degree path and took a different route in life by starting a Digital Marketing/Social Media Management company in 2014. She also has a passion for travel, having traveled to 38 states and 16 countries.

Cameron has a passion for traveling and went on an airplane for the first time at 3-months old. He is 8-years old, has lived in 3 states, and traveled to 14 countries and 22 states. Cameron loves sloths and came up with the idea of Slothee Loves Coffee during a trip to Costa Rica. He also loves playing on the beach, science experiments, and playing Roblox. They currently live in San Diego, California.