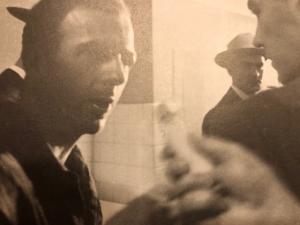 Lee Harvey Oswald attempts to answer a question from a reporter on November 22, 1963. Photograph by James Patrick Murray

When they accuse Lee Harvey Oswald of killing Kennedy, it may not be a lie. But which Oswald do they mean?”
— Lone Star Speaks author Katanna Zachry

Three or more Lee Harvey Oswalds were roaming around our country, and the world, prior to President Kennedy’s assassination in Dallas, Texas, in 1963.

Two scholars are now presenting documentary and photographic evidence that, prior to JFK’s public execution that November, the real Lee Harvey Oswald (“Oswald One”) and two other men posing as him, made their travels well known “as part of a carefully designed slight-of-hand plot to confuse the public about the true nature of their missions.”

The U.S. government killed its own president.

For the first time in nearly 60 years, this conclusion comes from Midland College researchers, and the coauthors of The Lone Star Speaks: Untold Texas Stories About the JFK Assassination, from Bancroft Press.

“The first clue was from someone we’ll call Oswald One, accused of murdering JFK with a rifle,” said Lone Star coauthor Katanna “K.W.” Zachry. “Lee, the real Lee, told reporters the government’s photo of him had been doctored. He stressed that the photo included his head, “but that’s not my body.”

“When they accuse Lee Harvey Oswald of killing Kennedy,” said Zachry, “it may not be a lie,” but “which Oswald do they mean?”

Lee himself and at least two other similar-looking undercover men, all using the “Lee Harvey Oswald” moniker, were publicly filmed, photographed, and interviewed. They were simultaneously witnessed at the front and back doors of the Texas School Book Depository, and one of them seen driving a grubby cab in Houston years later, according to Zachry and her coauthor, Sara Peterson.

They devoted 40 years to their research, regularly speaking at conferences on JFK/LBJ and the plot. Though Lone Star was recently published (November 2020) with revelations based on 200-plus new witness interviews and never-before-seen photos, the multiple Oswalds fact is an ongoing part of the investigation.

The fact that two men were using the name “Lee Harvey Oswald” at different times during the 1950s and 1960s was first revealed in 2003.

But more than two?

This is today’s startling, extremely important development,” said Bancroft publisher Bruce Bortz. “It will change the way people view the entire assassination. It did mine.

“Years back, I published an assassination book (Live by the Sword) that Kirkus called definitive, that the New York Times raved about as well-researched and well-reasoned. The History Book Club sent it to members as a featured selection, and Showtime optioned it as a miniseries. But that book’s narrative got bolloxed up numerous times by reliable reports of different Oswald sightings in different places at the same time!”

These three Oswalds have NOW been tied to the plot, and carefully eliminated factually as possible coincidences or mistaken identities.

Who Motivated the Multiple Oswalds?

Who could have motivated, organized, and controlled numerous persons so that they would deliberately impersonate Oswald, whom most of them probably never knew?

The answer is: an elite group of individuals who did not wait for history to occur. These people created history and determined the future. They had access to unlimited money, personal information that could induce others to “assist,” intelligence records, and names and numbers of people at all levels.
A gentleman told Lone Star coauthors Zachry and Peterson that all is not as it seems in America.

Zachry explained, “As we were quizzing El Paso police officer Jim Bundren about his possible connections to the FBI, CIA, and the CIA’s forerunner, the OSS, the man said, ‘There are alphabet agencies you and most other people have never heard of!’”

Zachry: “The impersonators disappeared quickly—when ‘the patsy’ was in custody and the media, and the minds of the public had been fertilized with propaganda.”