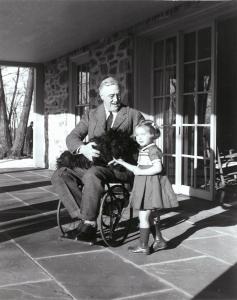 FDR in his wheelchair

One hundred years ago this month FDR became paralyzed. A new video summaries the 10 facts most people do not know.

WASHINGTON, DC, USA, August 5, 2021 /EINPresswire.com/ — 100 years ago this month, Franklin Delano Roosevelt contracted an illness that led to his paralysis. A decade later, he became one of the most important and most loved presidents the US has ever seen. He led the USA out of the great depression and he led the world through one of the greatest challenges of history: the 2nd World War. All this time, he kept his paralysis a secret. Of course the people knew he had a disability, but they did not realize just how serious it was.

A century has changed the world. Today, American politicians such as Greg Abbott and Tammy Duckworth have no problem winning elections as wheelchair users. But what if FDR had not hidden his disability? Would he have been elected? How would the world be different today?

To honor FDR and to mark this important 100 year milestone, RehaDesign has created a short video/slide show:

Dr Eugene Emmer, president and owner of RehaDesign said: "Franklin Delano Roosevelt went to great lengths to hide his disability because he thought that it would be seen as a sign of weakness. But fortunately much has changed in the past century and today people with disabilities have more options than before. But much more needs to change in the USA and the rest of the world until people with disabilities have the same access and the same rights as able bodied people"