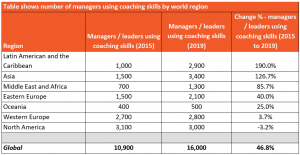 LONDON, UNITED KINGDOM, August 5, 2021 /EINPresswire.com/ — Research from Ezra, the leading provider of digital coaching, reveals that the global careers coaching market has grown by 21% since 2015, with the American market generating annual revenue of almost $1.3 billion alone.

The global careers coaching market is booming. With revenue growth of 21% since 2015, the industry currently generates $2.8 billion a year. This is due to the fact that the number of employers and leaders who are choosing to provide coaching for their staff has grown by 47% globally, an increase in demand that has caused the number of coaching practitioners around the world to rise by 33% to a total of 71,000.

When focusing on individual nations, the data shows that North America has, by far, the biggest coaching market in the world. After enjoying growth of almost 36%, the US market is now worth $1.3 billion. But while it is certainly the biggest market in terms of dollar value, the US is not the faster-growing market in the world. That accolade goes to Latin America & the Caribbean where the coaching market has grown by nearly 108% to create a yearly revenue of $191 million.

North American market growth is also being outpaced by Eastern Europe where the market has grown by 44% to create annual revenue of $101 million.

Latin America’s extraordinary growth is a result of the number of businesses and leaders choosing to provide coaching for their staff increasing by 190%, more than anywhere else in the world. The region now has 2,900 managers providing coaching for their staff, closing quickly on North America where a -3% decline in the number of managers providing coaching leaves the total at 3,000.

“The US continues to lead the global coaching market in terms of both value and scale. This is, however, partly because the sector, for the most part, was born in America and many American businesses realise the importance and value of investing in their workforce.

“However, this benefit is now being realised on a global scale and we’re seeing a rapid increase in value and activity in Europe, Asia, and Latin America, the latter of which is becoming an increasingly influential power in the global economy, so this coaching boom is no surprise.

“Coaching is going to play a vital part in helping companies find a way back to normality and profitability following the last 18 months of pandemic turbulence and it will be interesting to see how the sector grows and which global regions may soon challenge the dominance of the North American market.”

● Data sourced from https://coachingfederation.org/research
● Ezra delivers the highest quality professional coaching to your employees using industry-leading app-based technology.
● Ezra has redesigned coaching for the digital age to transform your company's workforce through affordable, scalable and high-impact coaching solutions. With world-class technology enabling quality coaching sessions, seamless user journey and regular reporting like never before.
● With 50+ years’ experience delivering world-class coaching in 66 countries Ezra best placed to drive the coaching revolution and share our knowledge to create better managers, more energized teams and a culture of talking, learning and growing across the world.
● Ezra supports many of the world's leading companies with targeted and highly customised coaching programmes.
● Ezra uses innovative technology to achieve the greatest user experience, but the heart of the service is the quality and diversity of their 2000+ global coaching pool and their result driven model of coaching which delivers the very best ROI for our customers.
● Now, everyone can be better with a coach.
● www.helloezra.com