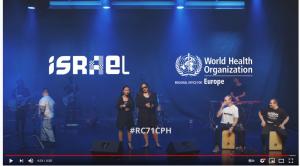 Music video by The Shalva Band on “Disability Inclusive Health”

We feel honored to demonstrate the incredible power of inclusion through the Shalva Band which is one of our most famous inclusion programs.”
— Kalman Samuels, Founder and President of Shalva

JERUSALEM, ISRAEL, September 20, 2021 /EINPresswire.com/ — Jerusalem’s Shalva Band which features eight Israeli musicians with disabilities performed Friday on an online conference on disability inclusion, as part of the 71st session of the World Health Organization’s (WHO) Regional Committee for Europe. The Regional Committee meets annually to formulate policies, provide oversight for regional programs, hear progress reports, and endorse new initiatives, and this year’s subject was geared to disability inclusion in Europe. The band moved their audience with the hit song “A Million Dreams” from the film The Greatest Showman, a song they first performed two years ago at the 2019 Eurovision Song Contest in Tel Aviv.

The Shalva Band is a landmark project based in the Shalva National Center, one of the world’s largest centers for children and adults with disabilities. Shalva offers a wide range of rehabilitative programs for over 2,000 individuals with disabilities and boasts some of Israel’s most advanced handicapped-accessible facilities. Throughout three decades of award-winning programs, Shalva has gained renown as Israel’s flagship center for social services and is an internationally recognized leader in the field of disability care and inclusion.

“It is wonderful that the WHO appreciates the benefits and is partnering in the goal of creating a more inclusive society, providing opportunities for individuals with disabilities throughout Europe and the world,” said Kalman Samuels, Founder and President of Shalva. “We feel honored to demonstrate the incredible power of inclusion through the Shalva Band which is one of our most famous inclusion programs. The Shalva Band inspired millions around the world and moved countless people to tears. Music is an extremely powerful tool, and we’ve been privileged to use it to promote positive social change and foster more inclusive societies.”

The track begins with vocalist Dina Samteh stating expressively: “We are all humans. We have our differences, and that’s what makes our lives interesting. Far too often, persons with disabilities face barriers and stigma and don’t receive the health services they need.”

Shalva Band’s lead vocalist Anael Khalifa adds, “I think of what the world could be if we broke down these barriers: A world of respect and acceptance. It is our responsibility to ensure that our voices are being heard and that no one is left behind.”

The online event on Friday was jointly hosted by the European Disability Forum, Germany, Israel, Norway, and the United Kingdom of Great Britain and Northern Ireland.

In May 2021, the World Health Assembly adopted resolution WHA74.8 to provide the “highest attainable standard of health” for persons with disabilities. The goal of Friday’s event was to raise awareness among member states about the resolution, identify ways to highlight the importance and advance disability inclusion in healthcare, and determine future stages for advancing the resolution’s goals in Europe.

According to the WHO Regional Office for Europe, one billion people around the world live with some form of disability.

Music video by The Shalva Band on “Disability Inclusive Health”