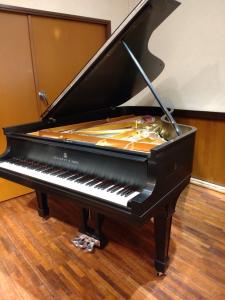 IRVINGTON, NEW YORK, U.S.A., October 26, 2021 /EINPresswire.com/ — On the occasion of the 10th anniversary of Okinawa Institute of Science and Technology (OIST), the U.S.-based OIST Foundation—with major support from the Ryuji Ueno Foundation—is donating a 1927 “Golden Era” Steinway Piano to the University.

The piano will foster deeper connections between OIST and the community through the power of music. In addition, it will attract world-class performers to OIST and play a fundamental role in OIST’s efforts to connect arts and science.

An inauguration event and concert to welcome the piano will be held in OIST’s auditorium at 17:15 on Tuesday, November 2, 2021, featuring OIST Foundation Music Ambassador and violinist Eiko Kano (visiting from New York City) and pianist Yuka Oyabu from Okinawa.

In response to the need for such a piano at OIST, and with the vision and leadership of OIST Foundation Music Ambassador Eiko Kano, the Foundation launched the “88 Keys” campaign earlier this year to raise funds to purchase a Model B, “Golden Era,” Steinway made in 1927 and restored by Japanese master Yu Takagi.

Mr.Takagi was deeply inspired by the vision of Ms. Kano and the determination of the OIST Foundation campaign, leading him to generously offer the piano at less than half the retail price. With a major donation of $88,000 from the Ryuji Ueno Foundation to the OIST Foundation, and contributions from other supporters, the Foundation was able to obtain the piano as well as cover all associated costs, including transportation of the instrument from New York and the installation of a dehumidification storage system at OIST.

The piano being given to OIST is a vintage Steinway & Sons, Model B, made in Steinway’s New York City Headquarters in 1927. This was the “Golden Era” of Steinway pianos as they are considered among the world’s best.

The OIST Foundation is also sponsoring all costs associated with this milestone event to help unveil the piano.