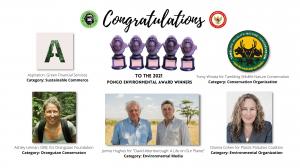 Recipients of the 2021 Pongo Environmental Awards 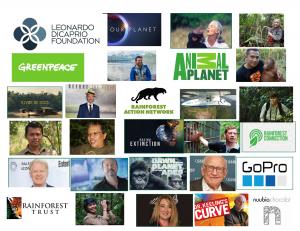 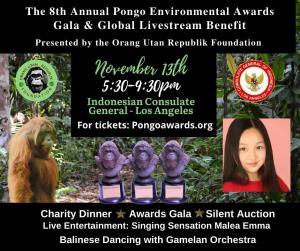 Honorees include Netflix/Silverback Films' “David Attenborough: A Life on Our Planet," Aspiration, Plastic Pollution Coalition, and other conservation leaders

We are delighted to be receiving the support of the Indonesian Consulate General this year…”
— Gary Shapiro, President Orang Utan Republik Foundation

The Pongo Environmental Awards, presented by the Orang Utan Republik Foundation (OURF), are given to those who have made significant contributions to protect the welfare of all living species via advocacy, leadership, public service, education, and research. The evening also raises urgent funding to save critically endangered orangutans from extinction.

This year's recipients of the 2021 Pongo Awards are:

• Acclaimed environmental Director/producer/writer Jonnie Hughes and Silverback Films for their Netflix documentary “David Attenborough: A Life on Our Planet”
• Global environmentalist Dianna Cohen (Founder, and CEO) and Plastic Pollution Coalition for working to end plastic pollution around the world with projects in 75 countries.
• Aspiration Partners, Inc. for sustainable commerce for their environmental advocacy and initiatives as a B-corp green financial organization.
• Indonesian businessman and conservationist Tomy Winata for his stewardship of the Tambling Wildlife Nature Conservation and Sumatran Tiger protection initiatives in Sumatra.
• International conservationist Ashley Leiman for her 30 years of advocacy of protecting wild orangutans in Central Borneo and founding the Orangutan Foundation UK.

The theme of this year’s annual fundraiser will be “Respecting Nature: Celebrating the Biodiversity and the Beauty of Indonesia.” Indonesia which makes up only 1.3% of the world’s land surface is a hotspot of biodiversity hosting 17% of the world’s bird species, 16% of the world’s reptiles, 12% of the world’s mammals, and 10% of the world’s flowering species. According to OURF President and Co-Founder Dr. Shapiro. “We are delighted to be receiving the support of the Indonesian Consulate General this year to pay tribute to those who make significant achievements in conservation and environmental sustainability, particularly in Indonesia, and in celebrating the beauty of that country’s rich culture.”

The evening's program will celebrate the beauty of Indonesian culture in the form of traditional music and dance, including singing performances by Indonesian-American sensation Malea Emma ("American Idol") who garnered millions of viral views for her performance of our National Anthem. Traditional Balinese dance and Gamelan music by the Bhuana Khumala Group will be performed during the Awards in celebration of the diverse cultures, ceremonies, and rituals of Indonesia, the world’s largest archipelago comprising 17,000 islands.

The Orang Utan Republik Foundation is commemorating its 17th year of educating people about the plight of the orangutan. Among the abundant biodiversity of Southeast Asia, the three species of critically endangered orangutans are unique in being the only wild great apes found outside of Africa. Orangutans are only found in the wild on the islands of Borneo and Sumatra in the countries of Indonesia and Malaysia (N. Borneo). Fewer than 14,600 individuals remain in Sumatra. Their population continues to decline due to the conversion of forest to agriculture, the illegal pet trade, being killed as pests or hunted, as well as habitat degradation from natural and human-caused activities, i.e., fires, mining, logging, palm oil, and major infrastructure projects.

OURF continues to move forward to advance its conservation education mission. OURF awarded its 200th Orangutan Caring Scholarship this year to students in North Sumatra, Aceh, Central Kalimantan, West Kalimantan and East Kalimantan (Indonesian Borneo). OURF currently is administering the Community Education and Conservation Program (CECP) in and around Gunung Leuser National Park in North Sumatra protecting the ecosystem and improving the livelihoods of villagers along the border of the Park. OURF also serves as a chapter of the internationally renowned The Orangutan Project in the United States and serves on the Roundtable on Sustainable Palm Oil (RSPO).

The 2021 Pongo Awards are being sponsored by J&K Gouw Foundation, Indonesia Media, Singapore Airlines, Greenhagen Charitable Fund, Beneficial State Bank, PT Santos Jaya Abadi, Panomatics, among other charitable donors. The Gala and Livestream are being produced by the Orang Utan Republik Foundation in association with What You Want Productions and Innovative Media Productions, Inc.

Limited tickets for the gala and Indonesian dinner can be purchased at www.pongoawards.org. The event will also be live-streamed on multiple digital platforms and feature an online auction with myriad rare items to raise funding for conserving critically endangered wild orangutans. Auction items include autographed guitars from both Bruce Springsteen and The Eagles; a Beatles Abby Road album cover signed by Paul McCartney and Ringo Starr; and rare Kobe Bryant memorabilia. Early bidding starts on November 6th and ends on the night of the Pongos at http://tinyurl.com/pongoauction. The gala will follow strict COVID-19 health and safety protocols. Additional information about OURF and the Pongo Environmental Awards are at www.orangutanrepublik.org.

The Orang Utan Republik Foundation (OURF) (www.orangutanrepublik.org) is a 501(c)(3) publicly supported charity with a mission to save wild orangutans through education initiatives and innovative, collaborative projects. It also serves as the US chapter of The Orangutan Project expanding its reach and support to over a dozen orangutan support organizations in Indonesia and Malaysia (www.theorangutanproject.org)