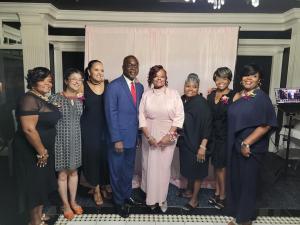 LANCASTER, NY, USA, November 2, 2021 /EINPresswire.com/ — A legacy of success will follow New York educator Parette Walker as she moves into retirement following a long career as a public school educator in Buffalo.

As she prepared for the next chapter in her life, Parette Walker was recently honored with a retirement party prepared by her friends and colleagues. Walker retired while serving as Principal at Arthur O. Eve School of Distinction #61 in Buffalo, the last step in a career that started as an elementary school teacher.

Parette Walker’s career: a closer look
Growing up in the 1960s and 1970s prepared Walker for the challenges she would face as both an elementary instructor and leadership roles at multiple public schools in the Buffalo area.

Parette Walker attended Buffalo State College and received a BA Degree in Communications, and a Master of Science in Education, from the State University of New York At Buffalo. She also obtained school district administrator certification as her career progressed.

Honors bestowed during a productive tenure
“I am very proud of my career as a principal in the Buffalo Public School District,” Walker said. “There were many proud moments under my leadership.”

Many of the highlights include improvements to provide increased academic support and emotional support to students.

With Walker at the helm, Frederick Law Olmsted School #64 was listed as one of the 10 best public schools for elementary students in western New York and was ranked #1 in all of WNY by Business First in 2006.

Educational improvements were noted at the Arthur O. Eve School of Distinction #61 as it moved to a classification of good standing from “in need of improvement” under Walker’s leadership. A gifted, talented program was started at the school for high-achieving students, and a book vending machine was set up in the school library to promote literacy. For high-stress situations, a calming room provided the opportunity for students experiencing an emotional upset to regroup in a safe environment to return to class instead of leaving school for the day.

Innovations such as this and more led to Parette Walker being honored many times in the local community and beyond. These included awards for outstanding service and leadership, dedicated service and an Apple for the Teacher award recognizing classroom efforts.

From mayoral proclamations to recognition from state senators and the common council, Walker’s legacy was celebrated across all levels of government as she entered this next phase of her life in August. With her retirement, Parette Walker will have more time to dedicate to her husband, Marvin, her two children, two grandchildren and to her favorite hobbies —  reading, traveling, baking and music.