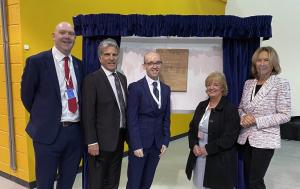 The built environment and construction sector is central in the fight against climate change with buildings consuming as much as 70% of the electricity generated globally and accounting for approx. 40% of C02 emissions. High Performance buildings including the Erne Campus are designed and constructed to have a low impact on their natural environment and to use minimal amounts of energy for heating, cooling, lighting and ventilation.

The framework supporting the UNECE Centres of Excellence initiative for High Performance buildings focuses on three key pillars, reducing energy consumption, increasing the carbon stored in the buildings and a greater use of building materials that are low in embodied carbon.

‘Buildings and the built environment must be the highest priority for action by communities and countries to deliver not only the Paris Agreement but also the whole 2030 agenda. Buildings are critical across all the sustainable development goals. The goals go beyond decarbonisation though decarbonisation is the most urgent as the climate crisis is existential. In fact when we succeed with this initiative we will have made a major step in breaking the historic link between development and carbon emissions.’

Dr Barry McCarron, Acting Head of Business Development at South West College reflected upon the sustainability work undertaken by the college in recent years and added:

“The announcement of the Erne Campus as the first building in Northern Ireland to join this global network is a significant show of faith from the international community in the work that has been undertaken by the College over the past ten years.

Membership of this network will offer untold opportunities for the College and our industry partners to collaborate with and learn from some of the most innovative organisations from across the globe and with the opening of the Erne Campus we are firmly in a position to take a lead on the work that will be undertaken by the group.”

Dr McCarron continued, saying South West College wants to ensure that new and existing buildings meet the highest possible environmental standards and will ultimately help reverse some of the impacts of climate change.

South West College will host a workshop as part of the COP26 programme of events on Thursday 11th November at 9:30am. The panel discussion will focus on the role that buildings can play in the fight against climate change and the event will be at streamed live at https://youtu.be/8Ohm1EgifvE

Watch this short video featuring Dr Barry McCarron talking about the Erne Campus development and the significance of COP26 https://youtube.com/watch?v-PTJsw8-nvoU

Notes to editor:
South West College is a further education college located in the west of Northern Ireland. The College is physically represented at campuses in Cookstown, Dungannon, Enniskillen and Omagh. The College employs over 500 full time and part time staff servicing some 14,000 enrolments with a turnover of £40m and makes a major contribution to the local and regional economy.