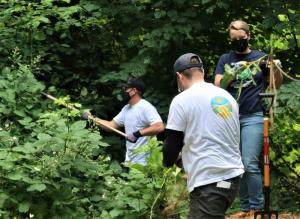 Scientology Environmental Task Force adopted Kinnear Park more than 20 years ago and holds regular cleanups to keep the park beautiful for the community. 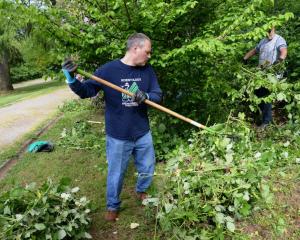 The Way to Happiness Foundation volunteers and members of the Scientology Environmental Task Force routinely remove invasive plants as part of their care of the park.

Volunteers from the Church of Scientology Seattle celebrate national Make a Difference Day, cleaning up one of Seattle’s oldest green spaces.

SEATTLE, WASHINGTON, UNITED STATES, November 4, 2021 /EINPresswire.com/ — The Seattle chapter of The Way To Happiness Foundation and Scientology Environmental Task Force teamed up with community volunteers to clear invasive plants in upper Kinnear Park in celebration of Make a Difference Day, an annual day of volunteerism across the U.S.

Volunteers did significant work in the park, trimming back invasive plants in shrub beds, and removing saplings that were overtaking trails. They joined volunteers from all over the world who have contributed more than 30 million volunteer hours since Make a Difference Day’s inception in 1992.

“We’ve been working closely with Seattle Parks and Recreation as part of their Healthy Environment Initiative which highlights stewarding and protecting our urban forests and natural spaces,” said Dave Scattergood, coordinator of the Scientology Environmental Task Force. “We hope the projects we’ve been spearheading in Kinnear Park will make it more secure and accessible to park visitors and neighbors alike.”

Scientology Environmental Task Force adopted Kinnear Park more than 20 years ago. They have been working to beautify Seattle area streets and parks through Seattle Public Utilities’ Adopt-a-Street program longer than any other group. The Task Force and The Way to Happiness Foundation have contributed thousands of hours of volunteer time to create a more sustainable environment.

“Giving service to others and being good environmental stewards is a watchword of both The Way to Happiness Foundation and the Task Force,” said Scattergood.

These groups take their inspiration from a nonreligious guide called "The Way to Happiness," written by author, humanitarian and Scientology Founder, L. Ron Hubbard, and follow Precept No. 12: “Safeguard and improve your environment.”

In this precept, Mr. Hubbard wrote: “There are many things one can do to help take care of the planet. They begin with the idea that one should. They progress with suggesting to others they should. Man has gotten up to the potential of destroying the planet. He must be pushed on up to the capability and actions of saving it.”