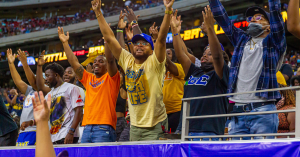 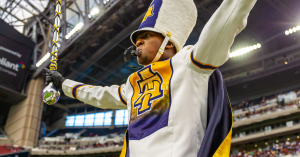 “The National Battle of the Bands is so much more than an event. It is a beacon of hope and inspiration for so many, a source of employment for small business owners, an opportunity for students to play in the band and receive an education through the scholarships we’re able to raise,” says Derek Webber, CEO, Webber Marketing & Consulting, LLC & Creator of the National Battle of the Bands. “After everything we’ve all been through over the past 18 months, we wanted to make sure our return in 2021 created as many opportunities and as much impact as possible, and I believe we did just that with the support of our partners and corporate sponsors.”

NBOTB By the Numbers
The power of the NBOTB’s influence was felt amongst the bands, fans and business owners throughout the city of Houston and communities at large. In addition to nearly 2,200 band members representing the eight HBCU bands featured in this year’s lineup at NRG Stadium, which drew in over 43,000 attendees, other official ancillary events engaged over 10,000 attendees with initiatives and experiences created to focus on youth and community engagement, college recruitment, Esports and entrepreneurship.

Students from the Houston Independent School District and surrounding districts attended the HBCU S.T.E.M. College Fair and gained direct access over 12 HBCUs from around the country who were recruiting for both undergrad and graduate admissions for S.T.E.M. and Non-S.T.E.M. programs.

Our Esports Masterclass powered by HTX Sports and Esports Tournament presented by Rockstar Energy Drink led discussions and raised the awareness and visibility of the growing industry amongst youth and HBCU students.

Cracker Barrel National Battle of the Bands presented by Pepsi Zero Sugar
The event’s mission is to enhance the exposure of Historically Black Colleges and Universities (HBCUs) and their marching bands, the roles they play in educating aspiring musicians and developing our future leaders. Event organizers have generated more than $500,000 in scholarships for the participating colleges and universities. www.nationalbattleofthebands.com

Lone Star Sports & Entertainment
Lone Star Sports & Entertainment is an event management company founded in 2003 that is closely affiliated with the NFL’s Houston Texans. Since its founding, LSSE has established itself as the leading sports event promoter in Houston. In addition to the Texas Bowl and the Texas Kickoff, LSSE has emerged as a premier promoter for international soccer matches, including Copa America Centenario, the 2010 MLS All-Star Game featuring Manchester United, the 2006 FC Barcelona U.S. tour, 2003 and 2008 matches between the United States and Mexico, and the 2005, 2007, 2009, 2011, 2019 and 2021 CONCACAF Gold Cups. LSSE has also reinvigorated the “Battle of the Piney Woods” rivalry between Stephen F. Austin and Sam Houston State and has promoted major concerts featuring country superstars including George Strait, Taylor Swift and Kenny Chesney.