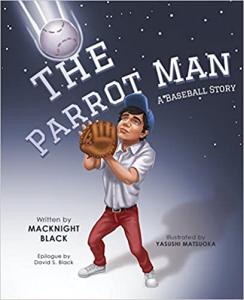 Learning the surprising joy and satisfaction of giving, and watching a young person mature through the experiences of life.”
— MacKnight Black

SALT LAKE CITY, UTAH, USA, November 9, 2021 /EINPresswire.com/ — The ninety-four-year-old author expands bedtime stories created for his children during a difficult season into a touching story about the challenges children overcome as they find their place in the adult world.

"The story touches on many themes useful to children when coping with adversity: finding a path forward after an apparent obstacle; receiving strength and renewal from the rituals of baseball; learning the surprising joy and satisfaction of giving, and watching a young person mature through the experiences of life. MacKnight Black's story is an engaging one for children and parents of all ages."

Channeling the comfort baseball games and baseball, in general, have provided him throughout his own long life, 94-year-old first-time author MacKnight Black’s "The Parrot Man: A Baseball Story" is an engaging story for parents and children of all ages. This is a lighthearted and moving coming-of-age story about the power of baseball to comfort and the value of compassion, community, and generosity. The Parrot Man has its origins as a bedtime story the author created for his own children in the late 1950s during a difficult season of transition for his family. More than sixty years later, his family encouraged him to publish this homespun, healing narrative in hopes that it will lift others.

Though the title “The Parrot Man: A Baseball Story” suggests that it may focus only on baseball, the content and overall message of the book are far from it. The Parrot Man addresses several matters of importance in the lives of young people: the need for belonging and acceptance and the pain of rejection; the fleeting satisfaction of impersonal attention from others; and the role of baseball as a satisfying distraction, as a medium for building bonds with mentors, and as a path to an awareness of greater beauty in life. Ultimately, "The Parrot Man" is about the growth of a child into young adulthood who learns in a surprising and unexpected way that it is by giving that we receive.

This story begins with little Barney starting his early life in a Baltimore orphanage. Never adopted to join a family of his own, Barney is told that his real father was an outstanding major league baseball player. Although Barney encounters obstacles in the fulfillment of his dream of succeeding as a ballplayer, he does not allow that to stop him from chasing his dream of attending major league baseball games at Washington, D.C.'s Griffith Stadium, home of his beloved Washington Senators. Barney's voyage leads him to discover a new way to participate in the game, becoming the “Parrot Man”, a role that gives him a long-sought sense of purpose and belonging.

But as the Parrot Man's reputation as a boisterous fan grows and he zealously pursues his quest of catching a foul ball, he feels more and more helpless. Something is missing. At a night game, the Parrot Man encounters a father and son sitting near him using baseball in a different way — to renew their relationship in the midst of uncertain times. They exchange realizations of new meanings and the enhanced beauty of night baseball. When the Parrot Man is suddenly given another chance at baseball glory, what choice does he make?

This lightly instructive work will resonate with grownups as much as kids. The Parrot Man takes readers on a whimsical, transformative baseball journey as Barney searches for his place in the adult world. What he learns and the place he ultimately finds is surprising, tender, and timeless. Unusual for a children’s story, the book includes a highly informative epilogue by the author's son about professional baseball at Washington's Griffith Stadium, which adds helpful context for the Parrot Man's story.

MacKnight Black attended the Episcopal Academy in suburban Philadelphia and graduated high school from Kent School in Kent, Connecticut. MacKnight also received a Bachelor of Arts Degree in English from Princeton. He has served as a peace officer for the Children’s Society in New York City, a book publisher’s representative at prestigious universities and colleges for McGraw-Hill, and became the first administrative officer for the US Department of Education’s Title 1 Program that supports the education of economically deprived and educationally disadvantaged children.

The Parrot Man
Written by: MacKnight Black Hardcover | $9.95
Book copies are available at the author’s upcoming and soon-to-be-released website (macknightblackauthor.com), Amazon, and other online book retailers.

About Authors Press
Authors Press is an online publishing company and book reseller catering to the needs of both experienced and aspiring authors as well as readers. They offer the best publishing solutions for full-time and independent authors. The company’s team of proofreaders, editors, designers and publishing professionals are committed to achieving industry standards for their client’s work to be published, marketed, and sold.