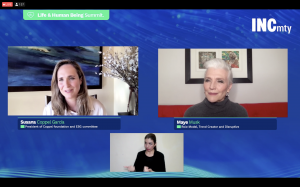 How to draw strength to be reborn and fulfill your dreams 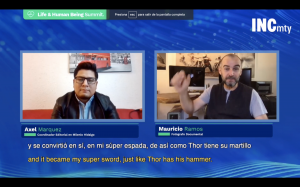 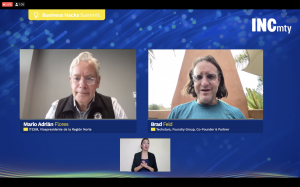 Independence of Mine and Other Lessons from Nietzsche

Maye Musk, the renowned model, writer, and mother of a fascinating family, shared her perspectives on improving the quality of people’s nutrition

This ninth edition was the launching pad to connect entrepreneurial ecosystems in America. INCmty it is a platform that delivers tools, knowledge, and networking. ”
— Josué Delgado, Director of INCmty

Joao Bocas, CEO of Digital Salutem, and David Albert, founder and CMO of AliveCor, explored in the fireside chat “The Future of Wearable Technology,” the potential of wearables in healthcare, delving further into the associated barriers and challenges. Thanks to the new smart technologies, a large amount of data can be collected then translated and interpreted to help doctors care for their patients' health. The current goal is to seek to reduce the costs of these devices to make them affordable for people with limited resources.

The fireside chat “How to draw strength to be reborn and fulfill your dreams,” we learned more about Maye Musk, the successful businesswoman and mother of Elon Musk, as well as outstanding trendsetter, dietitian, and model. She shared her life in a book, in particular the difficulties she faced as a bankrupt single mother. It was a demanding process, but when she saw people’s response she understood the importance of transmitting her message of personal fulfillment. Her childhood and adolescence in South Africa, her career as a model, and her constant struggle to achieve her goals have translated into a message of hope for women who are undergoing their own difficulties in their endeavor to find their path.

Sofía Pérez Gasque, National President of the Coordinating Council for Business Women, highlighted in her conference “Women as a fundamental part of Mexico’s economic reactivation” the primordial role women play in Mexico’s labor market and economy, which is essential for economic reactivation. This is because women are focused on helping their family circle and have demonstrated their resilience in recent years with the pandemic.

In the panel “Gaming: the future for generating jobs and revenues for the country,” Guillermo Vizcaíno, Head of Marketing and Public Relations at Lienzo, Jorge Lizárraga, CEO of Gaming Partners, and Mike Sorrenti, President of Game Pill, shared their perspectives on the future of the videogame industry, best practices, and future trends. The past few years have seen high levels of growth industry-wide, but all expectations were exceeded with the pandemic. The pressure that growing market demands are generating is such that the next generation is expected to be the one that will most play videogames in history.

In the panel “The implications of diversity and inclusion in organizational culture and education,” Roberto López A, Diversity and Inclusion Culture Leader at Walmart Mexico and Central America, Sonia Garza, National President of the Mexican Association of Women Businessowners (AMMJE), Inés Sáenz, Vice-President of Inclusion, Social Impact and Sustainability at Tecnológico de Monterrey, discussed the gradual process of cultural change that is taking place in many companies, and the importance of continuing to fight to achieve equity and inclusion, break paradigms, and seek an environment of diversity, thereby contributing to innovation.

The panel “The role of universities in regional economic development and the role of entrepreneurship” brought together voices from the sphere of universities, such as Antonio Ríos, Director of the Tec de Monterrey Entrepreneurship Institute, María Angélica Granados Trespalacios, Minister for Innovation and Development in the Chihuahua State Government, Jaime Parada Ávila specialist in Science, Technology and Innovation in the Public and Private Sectors, Sergio Mendoza, President of Desarrollo Económico A.C., Chihuahua, and Alfonso Pompa Padilla, Minister for Innovation, Science and Technology, Jalisco. They discussed the importance of exchanging experiences regarding the role of universities in building and consolidating of the regional entrepreneurship ecosystem.

Juan Pablo Murra, Rector of Higher Education at Tec, moderated the talk “The era of blitzscaling: 3 steps for exponential growth in LATAM” by Reid Hoffman, co-founder and Executive Chairman of LinkedIn, and Chris Yei, author and co-founder of the Blitzscaling Academy, in which they stressed that speed is the best strategy for Latin American companies to achieve ‘lightning’ growth today. In turn, the future requires a greater commitment to sustainability and the creation of technological solutions to enhance the development of society.

Erika Falfán, Vice-President of Operations Support and member of the Diversity and Inclusion Committee at Walmart México, and Luz María Velazquez, National Leader of Zona Shero, Tecnológico de Monterrey’s program for strengthening the business ventures and careers of women entrepreneurs in the global ecosystem, talked in their fireside chat “Business Digitization and Transformation in Equality and Diversity” about women’s contributions in the areas of technology, and the vitalness of creating safe environments in STEM areas for women entrepreneurs.

Raj Sisodia, Founder and Leader of the Conscious Capitalism movement, Distinguished Professor of Tecnológico de Monterrey and Babson College, discussed in his fireside chat “The Healing Power of the Conscious Enterprise for the Post COVID” the potential for socially responsible companies to achieve the recovery and healing that society needs in post-COVID times.

“This ninth edition was the launching pad to connect entrepreneurial ecosystems in Mexico, Latin America, the United States, and Canada. Without a doubt, INCmty is more than a festival, it is a platform that delivers tools, knowledge, and networking. In the near future, we will be witnessing the new unicorns that participated here,” concluded Josué Delgado, Director of INCmty.