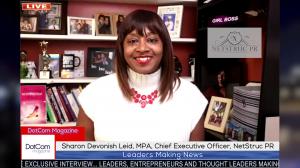 The Power Of Zoom Interview Issue

Sharon Devonish Leid is an amazing PR Expert I was astonished how she was able to break everything down so succinctly for our viewers.
It's no wonder why she has such a following in the PR space.”
— Andy "Jake" Jacob, CEO, DotCom Magazine