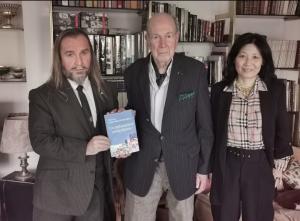 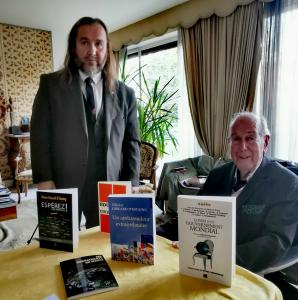 PARIS, FRANCE, November 14, 2021 /EINPresswire.com/ — The art and history researcher Thierry Rayer, President of the Cercle d’Études Scientifiques Rayer, recognized for having revealed the common origin of the culture of Humanity; a discovery that favors intercultural dialogue for the benefit of Humanity, will soon be invested to ensure the continuation of Olivier Giscard d'Estaing, brother of the former President of the French Republic Valéry Giscard d'Estaing.

At the beginning of the year, the researcher Thierry Rayer had already succeeded to the vacant seat of President Jacques Chirac as Honorary President of the association "Favoriser les Echanges Culturels entre la France la Chine l'Afrique et les pays Arabes". This time it is the work of Olivier Giscard d' Estaing that Thierry Rayer agrees to continue by succeeding to him as Honorary President of PANGEE ONG engineering of the peace which was granted the consultative status near the Economic and Social Council of the United Nations.

Also Ambassador in charge of the Relations with the States and their Representatives to the World League for the Right to Happiness since 2019, Thierry Rayer is convinced on the basis of the discovery concerning the element "the knowledge and the know-how of the universal process of creation" that the common origin of the art of all humanity will allow the people to reach the true happiness.
As such, he and Olivier Giscard d'Estaing had worked together on the access to the happiness of the people and envisaged to organize several international conferences on peace.

For the record, Olivier Giscard d'Estaing was founder, director general and vice-president of the board of directors of INSEAD. INSEAD has over 50 years of experience at the forefront of business education and research in Europe and Asia. In 2007, INSEAD strengthened its presence in the Middle East with a campus in Abu Dhabi and is committed to developing business education, bringing advanced managerial ideas and global business practices to the region.

Olivier Giscard d'Estaing has also been a director of Generali, IBM, Johnson, Société Internationale de Technologie (Chairman), and CEDEP, and advisor to the chairmen of Philips and Saint-Gobain. In the associative field, he was president of the European League for Economic Cooperation, the Junior Economic Chamber, BUSCO and COPAM, vice-president of the European Movement, co-founder of La Table Ronde de Caux, and governor of the Atlantic Institute.

The ceremony of investiture of Thierry Rayer will take place soon in Paris in parallel with the launching of the release of the totem book of PANGEE ONG on the engineering of peace: " LE PETIT LIVRE ROSE ", with for the occasion a session of dedications of Nathalie KESLER, founder of PANGEE ONG.