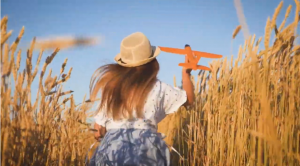 REDONDO BEACH, CA, USA, November 15, 2021 /EINPresswire.com/ — This month Klein Creative Media announced the launch of an Indiegogo crowdfunding campaign, to produce “FLY GIRLS – THE DOCUMENTARY”. This film in progress follows the lives of five female flight attendants as they transition from flight attendants to commercial pilots. Well on their way through pilot training, each woman is in a different stage of her training. They have banded together as a support group of likeminded women to support each other through the grueling five-year process of getting advanced education and accumulating over 2000 hours of flight time. Friday, in a rare gathering, all five women met in Long Beach at 11:30am in support of Sheena’s Multi-engine check out flight, and for a photo opportunity with a local Newspaper, and video coverage for the documentary.

“We are like aviation’s five musketeers,” says Meghan Kojima, flight attendant, pilot and co-star. “We are supporting each other unconditionally and rooting for each other. The other person being successful isn’t going to make us unsuccessful, and I think that’s important for us to remember especially as women.” Jenny Phillips, co-star, flight attendant and pilot.

With a future shortage of commercial pilots threatening our country by 2023, if we don’t promote aviation as a viable career for all genders, our ability to travel could be significantly impacted. Currently only 6.9% of the commercial pilots in America today are women. Watching their journey will inspire and empower the next generation of female pilots.

For more information on “FLY GIRLS THE DOCUMENTARY” visit www.KleinCreativeMedia.com or write to producton@kleincreativemedia.com. Or call us at (310)990-4120.

About Klein Creative Media: A video production company in Redondo Beach with studio and drone fleet. CEO, Marci Klein is an L.A. Emmy winning tv director. A sport pilot, drone pilot, member of the Directors Guild of America (DGA) and Producers Guild of America (PGA), Public Arts Commissioner in Redondo Beach, and on the Board of Directors for Redondo Chamber, Waterfront Education. She’s a wife, and mother of two teenage boys. She loves travel and surfing. She came up with idea for this documentary while on a surf trip in Costa Rica where she met flight attendant Jenny Philips in a swimming pool just after a surf session.