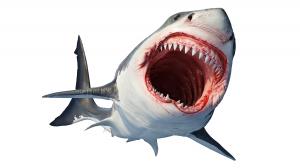 Otodus megalodon, an extinct mackerel shark from the Miocene/Pliocene. 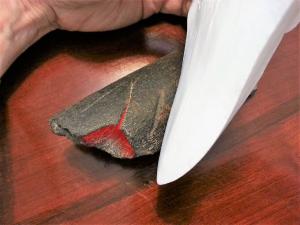 A replica Megalodon tooth compared to the bite marks found on a section of fossilized whale rib. The second groove (in red) indicates the point where the rib fractured during the feeding process. 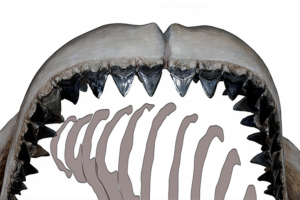 Illustration demonstrating how Megalodon scavenged whale carcasses by fitting its teeth between the ribs before biting down.

BUCKINGHAM, PA, US, November 16, 2021 /EINPresswire.com/ — Everyone has heard of Otodus megalodon (AKA Carcharocles megalodon), the 50-foot, 40-ton mega-toothed shark that lived from approximately 23 to 3.6 million years ago. It’s been featured in books, documentaries, and an assortment of movies as a fast-moving killing machine. But was it really the giant, whale-destroying monster we’ve been led to believe?

Max Hawthorne, paleo-researcher and author of the bestselling Kronos Rising series of sci-fi thrillers, doesn’t think so. Known in paleontology circles for his physics-based theories on why plesiosaurs had such long necks and how they used four flippers to swim, Hawthorne’s research indicating adult Megalodon sharks were mainly scavengers has become a hotly-debated topic.

Hawthorne stated during a recent interview. “People want to believe Megalodon was like a T-rex in the water, this unstoppable killer. But the evidence suggests that, while sub-adult Megalodon sharks were active hunters, the bulky, cumbersome adults – which were too slow to catch the 25-30-foot whales of their day – mostly resorted to feeding on drifting whale carcasses. In fact, if you think about it, it was a well-balanced food pyramid. The carcasses needed by the adults were provided by the much more numerous younger sharks, which were out there taking down whales their size, eating their fill, and leaving the rest to rot.”

In terms of the science, Hawthorne stated, “Everything points to this. In nature, certain body types exhibit undeniable limitations when scaled up to larger-than-normal sizes. During the Carboniferous and Permian Periods, oxygen levels were at 31%-35% (versus 21% today) and insects were also at their biggest. Yet, even then, the largest dragonfly was “only” around two feet across. It wasn’t just a matter of how they respirate, however. The biggest sea scorpions back then were about the same size as the Japanese giant spider crabs of today. There is no record of a crustacean of titanic size. Hence, we can infer that, even in the water, an exoskeleton has limitations. With sharks, the chink in their armor is their cartilaginous skeletons. At larger sizes, they become slow. Their flexible bones result in necessarily slower muscle contractions, thus less explosive power. That’s why whale sharks swim at a speed comparable to us walking, whereas a blue whale three times the whale shark’s length and six times its mass can approach 30 mph.”

Hawthorne went on to discuss the fossil evidence he’s collected and studied. “Initially, my theory that Megalodon was mainly a scavenger as an adult was based on the morphology of their teeth. The primary maxillary teeth of the shark are different than those of other species. They’re not just bigger, the teeth in the upper jaw/center are like bone chisels, with crowns that have almost column-like cross sections, and finely-serrated cusps that flare out from the crowns. These crowns evolved to slide between the ribs on a whale’s rib cage and, as pressure was applied, the cusps cut in from opposing sides with a sandwiching effect, until the bones just “popped”. Trying to rush in and smash into a prey item with a random bite would’ve resulted in lots of broken and lost teeth. The wedge technique works much better. However, it only works on dead whales, and would have evolved only if the rest of the carcass had typically already been stripped by smaller predators. The hungry adult Megalodon needed to get access to the remaining flesh, namely the heart and lungs, which were hidden behind a tough rib cage. The shark with teeth best adapted to getting to this food would’ve survived and passed on its genes, and so forth…”

Critics of Hawthorne’s Megalodon-scavenger theory have argued that there is no evidence, hence it is “just a theory”. Per the author; they are mistaken. “I’ve collected a stockpile of whale rib fragments that show undeniable Megalodon feeding traces.” Hawthorne said. “And on them, you see the exact indications I described. Multiple tooth scores, inflicted by the shark during the ‘feeling out process’, as it worked its upper jaw teeth between the ribs of its prey, like pegs lining up in holes. Once it had a proper grip, then the full bite force was applied and . . . crack! We see the explosiveness on the actual fossils – proof that the ribs shattered like eggshells. There’s no denying it, the evidence is there, frozen in time, part of the fossil record. The young sharks functioned like great whites, stalking and ambushing the small baleen whales of their day, while the blimp-like adults tracked down the rancid carcasses and did cleanup duty.”

When asked about the notion that a few fossilized whale bones show evidence of healing from a Megalodon attack, thus proving it was an active predator, Hawthorne grinned. “First off, we don’t know if the wounds in question were caused by adult fish or juveniles. But it ultimately doesn’t matter. Because, evidence of an attempt at predation only proves that the attack was a failure. Would an adult Megalodon try to make a kill if it thought it had a chance of succeeding? Of course. But trying and succeeding are two different things. Hence, this ‘evidence’ only serves to advance my theory. Fans of the extinct shark are very passionate, and that’s great. But they tend to take these things personally. There’s nothing personal about it, just like there is nothing shameful about a creature getting the bulk of its food from carrion. It works for vultures and hyenas. It’s just nature and science. And that’s all we’re doing. We’re following the science.”