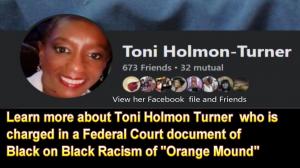 Toni Turner is the Memphis face & Practitioner of alleged Black on Black Racism against the Black Community of Orange Mound. Toni allegedly used her position to deny the Elderly Group The Orange Mound Energizers from being filmed at the Orange Mound Community Center 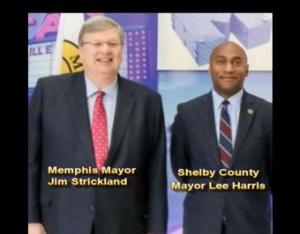 Anthony Elmore asked the Federal Court to bring both Mayors to Court . Elmore asked the court for Emergency Injunctive Relief from Retaliation, Discrimination , Racism, White Supremacy and Black on Black Racism against he and “Orange Mound” a Memphis Black Community 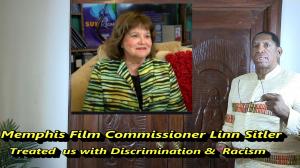 There comes a time when silence is betrayal. Our lives begin to end the day we become silent about things that matter. we will remember not the words of our enemies, but the silence of our friends”
— Dr. Martin Luther King Jr.

Elmore asked the Federal Court for emergency relief from Toni Holman Turner Public Affairs Manager, Division of Parks and Neighborhoods at City of Memphis. Elmore is fighting for the "Dignity and Respect of Black America USA." Unknown to Memphis and the world is the fact that the 1st Community in America built for Blacks by Blacks is "Orange Mound" in Memphis. Orange Mound's history dates back to two Black Churches in Orange Mound; Mount Pisgah and Mount Moriah both who can trace their beginnings to 1879.

In 2016 1st Lady Michelle Obama recognized the sanctity of "Orange Mound via naming Orange Mound "A preserve America Community." The Preserve America Communities program recognizes and designates communities that protect and celebrate their heritage, use their historic assets for economic development and community revitalization, and encourage people to experience and appreciate local historic resources through education and heritage tourism.

On November 19, 2021 Elmore filed for "Emergency Injunctive Relief" for protection against retaliatory, tactics, White Supremacy, discrimination and Black on Black racism to deny Orange Mound the benefits of its "Preserve America Community" status. Click here to see the (emergency Injunctive Relief filing.) In a statement dated July 2, 2015, President Barack Obama Jr. acknowledged the historically African-American neighborhood's significance. President Obama said: "As the first community developed in the United States to enable African-Americans to purchase land and homes, it played a groundbreaking role in driving progress at a difficult time,"

Elmore in 2019 experienced what he calls Memphis White Supremacy, Racism and Black on Black Racism greatest insult. While in 2019 Black Filmmaker Tyler Perry in Atlanta opened the largest film studio in America, whereas Tyler Perry has created an over 2 Billion dollar Black film Industry in Atlanta. Elmore who is Memphis 1st Independent 35mm Feature filmmaker has been racially written out of Memphis film History by Linn Sitler who is Memphis Film Commissioner. Linn Sitler with the help of Memphis Film Commission Black Board Chairman Gail Jones Carson, influenced African/American State Representative G.A. Hardaway and African/American Tennessee State Senator Raumesh Akbari was able to acquire a combined total of over 5 Million dollars in tax payer dollars to incentivize the production of the failed NBC drama, "Bluff City Law."

Elmore simply asked Linn Sitler and the Memphis Shelby County film Commission to come to "Orange Mound" to arrange a "news Conference" to support Black Films and Black Filmmakers. While Linn Sitler politicked a way to get over 5 million dollars for the failed White NBC Drama Bluff City Law she told Elmore that she could not come to "Orange Mound" because he allegedly wanted a news conference to raise money to make a movie. While the State of Tennessee could find over five Million dollars for the failed White NBC Drama there does not exist a sign or anything that acknowledge the significance of Orange Mound. Orange Mound is the 1st Community in America built for Blacks by Blacks and there exist no indication in Memphis that honors this significant Black Legacy.

In May of 2021 Elmore filed a two Million dollar Federal Discrimination law suit against Linn Sitler and the Memphis Shelby County film Commission. Elmore in an effort to acknowledge Orange Mound wrote and is producing a film that honors the legacy of "Orange Mound." The film is titled "Rock and Roll A Black Legacy.

Elmore's commitment is to show a positive side of Orange Mound. There is a group of retired Orange Mound dancers ages 55-to-92 called the Orange Mound energizers who practice at the "Orange Mound Senior Center that is managed by the Memphis Park Commission. Elmore agreed to feature the group in the film. Elmore formally requested permission to film the seniors via a detailed letter to Toni Holman Turner Public Affairs Manager, Division of Parks and Neighborhoods at City of Memphis on July 16, 2021.