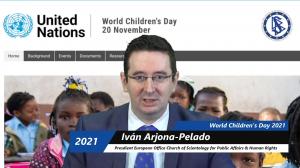 When children become unimportant to a society, that society has forfeited its future”
— L. Ron Hubbard

BRUSSELS, BRUSSELS, BELGIUM, November 22, 2021 /EINPresswire.com/ — In a stetement delivered last 20th november, the European representative of Scientology, Ivan Arjona, thanked the audience for listening to the message on World Children's Day. In this message, Arjona said that "Proper policies and caring can produce that children can, in turn, contribute to creating an equitable future." And continued saying that "This is to be done not just for us all in the so-called 'developed' countries, but especially for those children who end up suffering the consequences of active and passive policies from our 'civilized world,' from the petrol wars, the economic wars, and the tyrannies of those who enslave them for their own dirty, shameful and bloody profit."

The United Nations website explains to us that World Children’s Day was first established in 1954 as Universal Children’s Day and is celebrated on 20 November each year to promote international togetherness, awareness among children worldwide, and improve children’s welfare.

Mothers and fathers, teachers, nurses and doctors, government leaders and civil society activists, religious and community elders, corporate key players and media professionals, as well as young people and children themselves, can play an important part in making World Children’s Day relevant for their societies, communities, and nations.

Scientology's representative said also that "World Children’s Day offers each of us an inspirational entry-point to advocate, promote and celebrate children’s rights, translating into dialogues and actions that will build a better world for children. It is important that we celebrate not just with events, but also with knowledge and actions." And he quoted L. Ron Hubbard, the founder of Scientology, saying: “When children become unimportant to a society, that society has forfeited its future.”

Arjona finalized his message stating that "we must teach children about Human Rights, teach them The Truth About Drugs, The Way to Happiness, help them to learn how to study, and how to become contributing members of our society, while we should create a better world for them, with them."

And to help the audience on this task, he invited them to watch a video based on the works of Mr. Hubbard, to make "a better life for children and all of us".

The European Office of the Church of Scientology for Public Affairs and Human Rights is registered at the Registry of Religious Organizations of the Ministry of Presidency of the Spanish government, and also in the European Union's official Transparency Register, under the category of religious organizations, allowing the office to engage openly with the different European institutions,